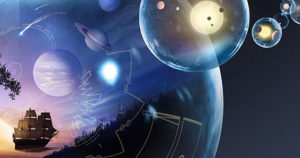 The brave adventurers had broken through all of Queenie’s defenses at the Facility save the last lines of defense upon the Aetherlasso itself. The Aetherlasso, which was tasked with pulling the Lyraa Ey Rielys aetherbubble towards the Facility, did not look at all like its more conventional namesake. Instead, it was an object bearing layers of concentric rings made of platinum, steel, iron, silver, and gold from the outside in.

And yet, their task was not over. There was a final, spoken passcode formed from a mixture of the five that was required to shut down the Aetherlasso completely. Initially, those present thought that perhaps the same password that worked for getting into the Vault would also work to shut down the Aetherlasso, but this was unfortunately not the case.

And the Aetherlasso continued its work, the completion percentage ticking up towards 80%, then 85%. It was not until Eliron hit upon the word “white” – both a description of the snowy bright suits worn by Queenie and her thugs as well as an anagram of the first letters of the other passcodes: Insane, Halfformed, Elements, Wondrous, and Terrestrial – that the Aetherlasso began to shut down.

Unfortunately, shutting down the Aetherlasso also engaged a self-destruct sequence. As the timer ticked down from ten, Afollia, Alaksanteri, Deichtine, Eliron, Esoneyuna, Kagato, Kreon, Unitos, Vynce, Xenthos, and Vynce quickly left the chamber to avoid the fireball that was surely coming. Tridemon stayed, however, out of masochistic curiosity and witnessed each of the planar rings fall to flames, then finally the base of the Aetherlasso exploded, leaving Tridemon barely clinging to life.

Across aetherspace and the many worlds within, there was a rumble as Lyraa Ey Rielys, the aetherbubble that had been subject to the Aetherlasso’s pull, settled into place and stopped moving.

Thus began the real chase of discovery. Adventurers hopped onto aetherships to find this new bubble, so recently rescued from collision with Prime and from falling into the grasp of the gnome Queenie. Afollia, Alaksanteri, Kagato, Kreon, Vynce, Eliron, Esoneyuna, Xenthos, Deichtine all spent time searching, sometimes falling to the harshness of aetherspace, sometimes wandering aimlessly, frequently returning to poor, traumatized Professor von Fixit to help triangulate the trajectory of where the bubble might have settled.

Eventually, Xenthos of Glomdoring was the first outsider to step upon Lyraa Ey Rielys, followed by Deichtine, Tridemon, Alaksanteri, Eliron, Vynce, Afollia, Unitos, and Kalaneya. They discovered a land that was harsh and largely barren, filled with blue, green and violet rocks, Sunless, Moonless, and starless, wreathed by electromagnetic fields and ever-present lightning storms. There, they found the muku, linorii, and gar that had been invading the Basin of Life, and they also found the kaelye: This was home to the kaelye race.

Taimi Kivinen was overjoyed to see her friends from afar come to the kaelye’s rescue. She greeted Tridemon and Alasksanteri with gladness, they having spent much time together during Taimi’s exile in the First World, and many words were exchanged, and much gratitude, now with clearer understanding of one another.

Xenthos also greeted Taimi as a friend, and then he set about to help the kaelye with another problem they had upon their aetherbubble: the slow death of their plants and animals to an unknown cause. In the process, he met many of the other inhabitants of the bubble, all kaelye: the Sages, the Shapers, the kaelye children and adults alike, as well as the kaelye who had fallen insane, wandering the wilderness. Finally, Xenthos and his companions managed to cure the flora and fauna of Lyraa Ey Rielys, sending a mist of wyrden power over all, having used their own shadow essence for the purpose.

For his efforts, Xenthos was granted a single, shattered shard of blue stone, bearing memories from the Goddess Kaenalye. Before the Master Ravenwood, Xenthos activated the stone and witnessed visions from Kaenalye’s last millenia, learning that Lady Kaenalye was sister to both Maylea, Bloom of Serenity and Eventru, Crown of the Exalted and had splintered into the kaelye race upon the bubble of Lyraa Ey Rielys.

Out of their long isolation, the kaelye of Lyraa Ey Rielys have finally joined the rest of Creation. What will be their role in years to come, as they step into the history and politics of Lusternia?

← Professor von Fixit and the Aetherlasso of DoomYear in Contemplation: 2018 →