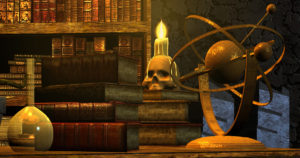 Psionic waves crashed through the Prime Material Plane. Though at first perplexing, they soon revealed their origin, as the thousand linorii glowbats that had invaded Lusternia over the passing years spoke in unison. Hello? Help! This is Taimi, we’re being pulled somewhere. We can see light.

Many came to witness these panicked messages, including Sir Romaan D’Varden of New Celest, Alaksanteri Elithysius of Gaudiguch, Kish of Hallifax and a contingent from the Glomdoring Commune. Following Taimi’s crackling words, they set out to work out where Lyraa Ey Rielys was, how it was being pulled, and where.

It was Xenthos An’Ryshe who first went to the Facility, spotting that there was a new complex hidden somewhere there, but not investigating it. as he returned to the Prime Material Plane, Romaan spoke first to Captain Girda and then to Professor von Fixit of the Starhopper. Though the Professor remained wild and alarmed (perhaps from the threat of Queenie’s wrath, and perhaps from the threats of a savage leopard), he did reveal that Queenie was on the Facility, and that he had given her the schematics for a device that would move an Aetherbubble.

Now grouped together, Romaan and Xenthos travelled to the Facility and located the hidden complex. Unable to glance into its hidden entrance, they resorted to charging boldly in – whereupon they found the near two dozen of Queenie’s goons that were waiting for them. They died in short order, but returned shortly thereafter with a larger group to take them down (though a few more were still foolish enough to walk in alone).

With her guards taken down, the Gnafia boss Queenie offered parlay. She at first made small talk, but discussions quickly turned to her intentions. Reiterating much of what she had said in the Basin the month before, she strongly suggested that it was not her intention to destroy Lyraa Ey Rielys.

However, several of the group at this moment took the opportunity to explore the rest of her base. Tridemon Regalis re-entered the room from Queenie’s personal study with a stolen letter clutched in his hands – to which the Gnafia boss took affront. She called them thieves, and promptly began her assault.

Meanwhile, the work of the Aetherlasso – that device designed by Professor Gargle von Fixit – continued unsullied.

The first fight with Queenie did not go well. She and her associates took out everyone who came against them, with the Gnafia boss then retiring to the vault entrance to guard it. Most resurrected and began to prepare for a retaliation, but Eliron Shee-Slaugh of Glomdoring eschewed this. Instead he sacrificed his own demidivine essence to remain as a soul, that he could converse with Queenie as she waited.

She spoke to him at more length of her plan, commending the kaelye on their vision and capacity to generate power – their usefulness for ‘business’. Whilst they were talking it was clear that Queenie was wounded, though she seemed unconcerned by it, and that her spies were far reaching – for she already knew that von Fixit was broken.

She also, quite candidly, explained that she was just there to stall them – and the Aetherlasso continued to pull Lyraa Ey Rielys closer to the Facility.

Others attempted to get more information out of Professor von Fixit, but by this point the questions had driven him into a gibbering mess, his fear of Queenie evidently so great that he was certain of his impending doom.

But the adventurers would not accept defeat. They grouped up, now larger in number, and moved in to take Queenie down. Whether they did or not remains a matter of debate – they beat her down until she was swaying and staggering, but she would not fall. “You win this time!” she proclaimed, spitting blood. “You will not win the next!”

And then, in a flash of transportation, she was gone.

The adventurers turned their focus to breaking into the vault. The door, they had determined, had a password – but they did not know the password, nor what it was talking about with regards to a ‘shift number’. Only at length did they realise it was enciphered, and indeed – thanks to a recorded message – that it was called an Enciphered Gnomevault 2000.

Whilst some remained to try and decipher the situation, Tridemon Regalis travelled back to the Starhopper, to speak with Pinky Puddlegum. She was tremendously excited by the idea of a real Gnomevault, which she said was very rare. She explained that the password was static, but that the shift number – the number by which the letters were rotated – changed every day and every time you failed 3 password attempts. Fortunately, she said, it was not a Gnomevault 3000 – those were much worse.

Armed with this knowledge, Tridemon returned to the Facility. Many had worked out this information already, but it was good to have it confirmed. A final recorded message from the Gnomevault gave them access to the password reminder – ‘look in a mirror’ – which led them to realise the password was Queenie’s own name.

At this point it was simply a matter of brute forcing the password until they guessed the shift number correctly, which they did with a shift of three: Txhhqlh.

They were in – but the Aetherlasso was almost at 70% completion. They were running out of time.

← A Collision Averted, and Wilds DisplacedHow to Rescue Aetherbubbles and Catch Up with Old Friends →