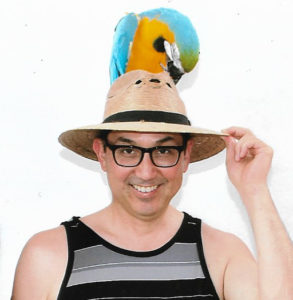 There once was a man who was not a young man, who once thought he would write stories but his writings were unfinished or lacking, who once dreamt big dreams but they drifted away as many dreams do. His life was not unfulfilled; he found work that he was good at, fell in love with another man with whom he’d find much happiness, and generally lived a life that was prosperous and filled with many friends and accomplishments.

One day, back when computers were young and modems blared like sobbing sirens, this man found incredible games in worlds of text, bringing back memories of high school and college where you could adventure through dangerous dungeons and fight fantastical dragons with a pencil, graph paper and some like-minded friends. In one of these virtual worlds, he met another man who was still young and ambitious, and who created a new virtual world and invited the older man to explore this new game. After several years, the man who was not young immersed himself in this new game, rose to virtual divinity, and loved creating stories for players to enjoy.

The younger man offered the other, who definitely was not young now, an opportunity to create his own virtual world, and the dreams that seemed lost came scampering back. Even though he worked ten-hour shifts in the corporate slums, he embraced the opportunity to create his own game, though the learning curve was high and the amount of work near overwhelming. Along with a coder who followed the man’s dream, a new virtual world was born, spun from stories long kept banked in the embers of his imagination. Even though the game was never able to let him leave his day job, he steered the game forward and it prospered for nearly a decade and a half.

But prosperity doesn’t last forever, and disaster struck the beloved game of the man, who now was old (and let us not forget was never young when this tale began). Many players disappeared from the virtual world he built, and the man was too blind to see it coming. Perhaps he did not listen to those who foresaw the diaspora, perhaps he was too proud and stuck in his ways, perhaps he thought the game would continue forever as it was. Perhaps he was just too old. We will never know the answers because the man does not know.

Of course, that man who is now an old man is me. I just turned 54–if you think age is just a number and 54 isn’t all that much, then you must still revel in at least relative youth and not realize that the body and mind are not cast in amber, forever changeless and pristine. I still work ten-hour shifts in the corporate world and still dedicate myself to Lusternia. It’s harder than it was 14 years ago, I can’t deny the reality of aging, but neither can I deny that Lusternia is as much a part of me as my left arm or my waking dreams.

I wasn’t sure how to review this year, for it is no secret that a large population of our players has moved on to other pastures, and I want to be transparent and honest with those who have stuck by us. Rather than spinning rosy pictures of imminent returns to Lusternia’s earlier days of glory, I will merely reassure all players, as Iron Realms has reassured me, that Lusternia will always have a home under its banner, and for that I am forever grateful.

However, things must change, as all things must, and Lusternia will become free-to-play (like Imperian) within the next several months. At that time, you will still be able to purchase credits and have elite memberships, but you will not be able to retire and transfer credits earned after the switch-over. Your retirement value will be locked at the time of the switch. However, you will then be able to earn daily credits in the game, up to 20 credits a day, through questing and bashing and other ways of participation.

I am still the producer and have no plans of leaving. I will always be part of Lusternia, whether I am paid or not, whether I have a job title or not, so long as you and Iron Realms will have me. For better or worse, you are stuck with me! Also, Orael continues as our coder, and our incredible volunteers will continue to support us and create amazing stories.

We will, however, have to bite the bullet and make some changes to the economy that some of you may find challenging. You will see some rapid changes to commodity production, gold generation, and questing rewards within the next several months. A new economy is needed to maintain a healthy and sustainable game world.

There is also a very exciting new system coming within the first half of the year (hopefully before April) that will provide more motives for guilds, more daily activities, and more competition among the player organizations. I really don’t want to say more, but wanted to let you know that we aren’t slowing down development and will continue coming up with new features.

Finally, I want to thank the players who have stuck with us, through thick and thin, in fair weather and foul. The new reporting system is an opportunity to let you guide us in what you want to see in Lusternia.

For those who have left Lusternia, if you even read this, I want to thank you for helping shape the world and apologize if I did not listen to your needs. I hope one day you might return to see how Lusternia has risen from the ashes. But whatever you decide, I wish you well.

Love and respect,
Robb French a.k.a. Estarra
Producer of Lusternia
← How to Rescue Aetherbubbles and Catch Up with Old FriendsJanuary 2019 Newsletter →