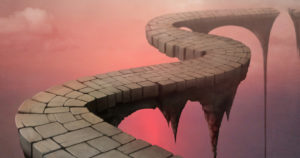 As the last of her people returned to the kaelye basecamp aided by the peoples of Lusternia, Taimi Kivinen turned her mind to growing a ship from the algontherine egg that Tridemon of New Celest had given her. Not being an expert in the manipulation of creature traits, Taimi employed the services of the kaelye ‘Shapers’ who came with her. Taimi explained to interested citizens of the Basin of Life that Shapers were a special sect of kaelye who were adept at manipulating and changing the traits of living things. Thus, Taimi left the egg with the Shapers, who were to also build a shell for their new aethership.

Taimi spent the next years exploring the Basin of Life, traveling and learning all she could of those locations she has not yet seen. Her Common having improved significantly, Taimi visited the forest of Serenwilde, where she learned of the woodland creatures of Lusternia and the fae of the Ethereal Plane. She then visited Hallifax, paying respects to a fallen kin upon the Emerald Road. Her attempt to visit Magnagora was sidetracked by a journey into the Blasted Lands, where she learned of and was immediately confused by the concept of the Taint. On her visit to Gaudiguch, Taimi was fascinated by but wisely did not examine the teeth of the Guardian Drachou. Finally, she was brought to Magnagora proper, where she was invited to visit one of the many laboratories of the Engine of Transformation, and she delicately declined out of a sense of dread.

In Klangiary of 518 COE, Taimi Kivinen informed the Basin of Life that the kaelye were ready to attempt to return home. Citizens of the world found Taimi sitting in the basecamp upon a massive wagon of stone and wood bound by muku threads. The wagon was loaded to the brim with disassembled parts of the new kaelye ship, with half circles painted a bright gold in honour of the Sun and Moon and filled with odds and ends of many colours. Xenthos of Glomdoring and Dys of Gaudiguch were the first to realise that the kaelye may need help bringing the wagon to the Aetherplex, where they were heading.

With Ascendant strength, Xenthos pulled the wagon onwards towards Avechna’s Peak. But on the way, he and Dys, along with the crowd of onlookers who gradually joined them, were attacked by groups of gnomes dressed in white suits who answered to someone named ‘Queenie’. Though the groups were easily dispatched, they returned again and again to harrass the kaelye wagon convoy, which moved slower and slower as Xenthos climbed the mountain paths.

Finally, they reached the Aetherplex with one last, massive tug. To there, Taimi Kivinen gathered the rest of her kaelye people, including Shapers who put together the new ship. Taimi placed the now grown algontherine egg within the constructed shell and named it Alku, for new beginnings. Though some offered to travel along with the kaelye in their search for home, Taimi refused, noting that they themselves did not know where they were going and did not wish to doom others to a lifetime of wandering. She promised, should she reach home, that she would teach the language of Common to her people, so that all could speak together freely should they meet again.

With that, Taimi Kivinen entered the algontherine named Alku, and with the help of her rescued peoples, set off into the deeps of aetherspace, searching for the place they called home: Lyraa Ey Rielys.