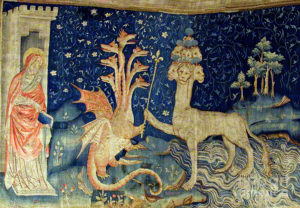 In Tzarin of the year 515 COE, a great crash echoed across the fabric reality, and a booming explosion rose from the vicinity of the northern Ackleberry Highway. “Auttakaa minua!” a mysterious voice cried, and a tall, blue-furred humanoid was spotted dashing past the Triple Junction and towards the Tar Pits. Citizens of every city and commune in the Basin of Life rushed to learn what was happening, and amid the thick sludge of the pits, they found a young woman trapped in the tar. Though she leaped away as soon as she could pull herself out, unlike the shadowy figures of the months before, this time, she was caught and surrounded.

The inhabitants of Lusternia soon found that they could not communicate with the young woman, as she spoke a language unknown to any of the races present, a language once heard upon the lips of the mysterious visitors that had appeared in the cities and communes months before. The woman, seeing herself unharmed, relaxed enough to relay through gestures that she was of a race called the “kaelye”, and that her name was Taimi Kivinen. In bouncing leaps, she led the her curious followers back towards the crash site of her ship at the northern end of the Ackleberry Highway. Then began a long process of language learning, back and forth.

Before long, Taimi learned that Kethaera and Anita were called faelings, and that Kogon was a tae’dae (and not kogontaedae, as she initially heard), as well as the names of a number of other races in Lusternia. For their part, the inhabitants of Lusternia learned that Taimi and her people, the kaelye, had come to Lusternia in a large blue ship shaped very much like an egg, and that they called the ship Kauko. Taimi also, through gestures, paraphrasing, and miming, came to make her audience understand that she was worried about her fellow kaelye, who even that moment were scattered across the Basin of Life after their ship’s crash, and she asked for help from the inhabitants of Lusternia to find them in their hiding places and to bring them back to the camp. Of Taimi’s helpers, Anita was the first to locate the other kaelye, and Kalnid was the first to convince them of his goodwill, with many others to follow.

Over the next year, Taimi gradually learned Common from helpful members of the cities and communes: Kethaera of Hallifax, Alaksanteri and Steingrim of Gaudiguch, Tridemon of New Celest, Xenthos of Glomdoring, Arix of Serenwilde, Shaddus of Magnagora and many others beside. As Taimi’s Common improved, those who worked closest with her learned many things about the nature of the kaelye and their home, as well as the nature of the plants and creatures that have come through to Lusternia over the past decades: the muku, the linorii, and the garosaurs, which the kaelye appeared clearly familiar with. They learned that the kaelye homeland was called Lyraa Ey Rielys, and that apparently, the Sun, and the Moon, and the stars, and the sea, and many other things common to the Basin of Life, were utterly alien to the kaelye. They also learned that from Taimi’s lips that the kaelye were possibly shards of a divine named Kaenalye. This information was also learned in parallel by a group of Serens–Karandyn, Sondayga, Fritholf, and Coraline–who discovered even more secrets and lore deep in the Temple of the Elder Goddess Maylea, to their wonder and surprise.

The slow acculturation for Taimi Kivinen was not without conflict. The first altercation came a only few months after the kaelyes’ arrival: Taimi Kivinen was visited by the gnome Stefano, whose involvement in the trading of explosive muku, linorii spawning grounds, and mysterious locations had earned him fame and infamy in recent times. Her cries alerted Alaksanteri, who came to her rescue, and who learned through Taimi’s broken speech that she was accosted by a “bad gnome” and was hurt by him when he wished to learn more of her ship. The second altercation came when Akali of Gaudiguch slew a rabid garosaur in front of Taimi, against her protestations. In rage, Taimi came to blows with Akali, who fought back with fiery determination. Taimi’s cries for help brought Xenthos of Glomdoring to her rescue, and she was whisked away to the southern forest for a time, for protection and for healing, before returning to her camp with an assurance of safety from a contrite Akali. It soon became very clear to many who visited her that the kaelye had a special place in their heart for the rabid, ravaging garosaurs that had been plaguing the Basin of Life.

After a few visits to the homes of her newfound friends (and a near drowning in the Inner Sea), Taimi Kivinen set her mind to helping her friends learn about the rearing and caring of the garosaurs from her homeland. In Tzarin of 516 COE, smoke signals from the kaelye’s campsite drew the attention of the inhabitants of Lusternia once more. They gathered as a group at Taimi’s campground, where a roaring campfire was blazing brightly. In her broken Common, Taimi explained the life cycle of the muku balls, sinkers, threads, and floaters, and how they fed the linorii. She explained how garosaurs ate the linorii and grew into cocoons. She explained that if the cocoons were not stroked and caressed and cared for, then the result would be what Lusternia had already seen: the rabid garosaurs, wracked by pain. For those unfortunate creatures, Taimi performed a ritual of sending-away that began with the garosaur’s ritualistic death and ended with a cleaned rabid garosaur skull resting atop a tree, so that the garosaur could “sleep” and “travel home”.

Finally, Taimi Kivinen brought out a garosaur cocoon, much like those collected by the researchers across the Basin of Life. She softly whispered to the cocoon, caressing it, stroking it, showing it love and affection. Gradually, the cocoon stretched, grew, wobbled, and opened up reveal a fully grown adult garosaur, one that did not hold the psionic pain that emanated from its rabid cousins. As a suggestion from Fritholf of Serenwilde, the creature was named Hashima.

← A Kelpie in MornhaiGoing Home →