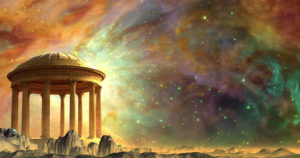 In Avechary of the year 503 after the Coming of Estarra, the skies of Lusternia cracked open with blue-purple lightning. The very atoms of reality shifted, and strange shapes and stars shifted in and out of view upon the firmament.

While the inhabitants of the Basin of Life were reeling from these strange circumstances, a rain of bouncing balls began to fall from the roiling skies, with no hint as to their origins. The dense, elastic spheres bounced everywhere throughout the Basin of Life, finding their way to the most unlikely of places. Capitalising on the appearance of the spheres, a dark-spectacled gnome named Stefano arrived on Avechna’s Peak, seeking to purchase the spheres for his collection and giving those who brought him the balls a sizeable reward for doing so. Although there were suspicions on the origins of the dark-spectacled gnome, no one could get a straight answer out of the wily businessman.

And the balls kept raining down, and the skies kept flashing with lightning, and the astute who looked up to the stars saw that Papaxi and Aapek struggled with one another against a strange backdrop. So for many months, the inhabitants of Lusternia brought Stefano the raining balls, and they enriched their own pockets in the process.

In Avechary of the year 505 after the Coming of Estarra, the skies of Lusternia were lit with an altogether different light. Flashes of green appeared, followed by explosions that rocked the mountains and the undervaults of the Basin of Life. Dwarves shouted their glee and vied with one another across the peaks.

Xenthos was the first to find his way to Gemli Vonglori of the Southgard silver mines. He among others questioned Gemli as to the meaning and source of the explosions: The dwarf reported that a gnome came by and sold the village many round ‘explosives’ that they were using to significantly speed up their production of ore; in a gesture of magnanimity, he gave Xenthos a sample of the glowing explosive. At the same time, across the Basin of Life, Ayisdra was questioning another dwarf, Fofur Whurgrim, as to the origins of Rockholm’s explosions and explosives. Fofur told much of the same story, and he provided Ayisdra also with a sample of the same glowing explosive.

Another explosion drew Xenthos and inhabitants of Glomdoring towards the village of Angkrag in Avechna’s Teeth, while at the same time, Ayisdra made for another source of information so prominently planted upon Avechna’s Peak, the gnome in dark spectacles. Ayisdra questioned the Stefano on his intent with the balls, accusing him of association with the glowing explosives now appearing all over the Basin’s mining villages, but the gnome adamantly denied involvement. The further arrival of Kethaera, and then Yendor, and then Nuli, and then many others, each with their own questions, yielded few answers despite offers of money; it seems that some information was worth more than money. Stefano blithely continued his purchase of the balls falling from the heavens, paying for them handsomely. Meanwhile, in Angkrag, Glomdorians including Xenthos, Crek, Yendor, Deichtine, Synl and Tylwyth were plying Omar d’Vanecu and Nasir n’Rotri for informaton on the explosive glowing balls. Suspicious that the questioners were spies from the dwarves, Omar was reluctant to give information, particularly smarting from insults by Crek and Yendor. Deichtine funded the purchase of information, along with another explosive ball from Nasir, setting it off along with Xenthos some distance away to test its effects, which the two Ascendants found underwhelming for their tastes. Satisfied with what they’ve learned, the Glomdorians left Angkrag.

Another set of explosions in the Undervault signalled that the villages of Ptoma and Ixthiaxa were not immune to the charms of whatever salesperson had been peddling the green-glowing bombs. Losing interest by this time, the inhabitants of the Basin of Life returned to Stefano upon Avechna’s Peak in another half-hearted attempt to glean some admission from the gnome, but none was forthcoming, and the dark-spectacled businessman continued to claim ignorance of the explosives.

Many questions remain: Where do the bouncing balls come from that rain down from the lightning-filled sky? Are the related to the glowing, explosive balls that are now driving a two-fold increase in the commodity production of the affected villages? What is the role of Stefano the gnome who sits upon Avechna’s Peak? And what of the strangeness in the stars and vibrations that continue to resound nauseatingly through reality?