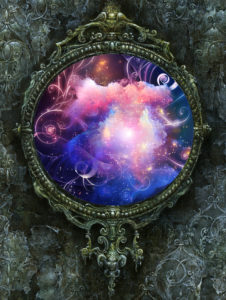 Wanda Murkle was under no illusions that she was the sort of person people liked. But then, she didn’t have much of an interest in being liked. There would be rapture, and He would come and consume them all, and all would be as it ought to be. That was enough. If people thought her mad, or cruel, or wicked, that was besides the point.

Nonetheless, the Humanistic League were beginning to grate upon her. Not the young girl, Elsa – no, she was a useful tool. So malleable, for a clever little girl. So open to new experiences. To local cuisine. To His rapture. No, the issue was the other one – Constance Walker. She was becoming a problem.

Wanda had observed her, traipsing in and out of the village. Cavorting with Serenwilders, talking about how Elsa was obsessed and her life being threatened. Hmph. That girl, Faythe, had been following them around like a lost puppy, calling them friends – and then, to Wanda’s delight, had helped her reintroduce Elsa to the ways of the Great Master. Ha!

Then the clouds above Duum turned yellow, and Wanda’s heart filled with joy. Was it Him? Was He making His move, at last – to bring rapture to the world? Would she finally find the bliss of eternity in His embrace?

Her fervour was interrupted by commotion and the sound of wailing. Elsa was at it again, raving about a plan that was complete, too late to stop. Wanda was just considering going to investigate when a Magnagoran noblemen accosted her in her rooms. Mrak was his name, and he came not only with a curious look but many questions.

They confused Wanda. He seemed convinced she had attacked him, and Elsa too – had she perhaps given herself over to the Avatar of the Great Master, and not realised it? It was possible. And if this was the rapture, then it could be too much for her mind to bear. Yes, that was it. She must have attacked them, and that meant she was chosen! Chosen by the Great Master!

Delight making her triumphant, Wanda encouraged the nobleman to raise the Soulforge to assist the Great Master’s plans, then watched as he left the village.

Since Wanda had visited her and told her about the great plan, one that had been in the works for many years, she had struggled with her memories – even moreso than usual. It was getting annoying. And more to the point, it was getting dangerous. She’d never seen Wanda attack people before!

Luckily, there was a giant faeling to hide behind. Elsa hadn’t paid much attention to his name, but he didn’t seem bothered by Wanda’s attacks, given that he was still chatting away at the same time. She told him all about what Wanda had said when, um, she hadn’t been quite as weirdmad, and about how she was worried Wanda was here to kill her.

At least, she tried. Some of it came out in shrieks. Then when Wanda left there was some sort of argument about…something. Keeping them safe? That was it. Constance was becoming obsessed with it. Elsa thought she needed some inspiration. That always helped her. Ooh, inspiration. That would be nice. A bit of meat.

But no, she was being dragged away, to Serenwilde which was full of boring elfen and not interesting humans at all. To make things even worse, they got dragged up before some fancy wilder with a strange name – Fire? Flare? Fair? – and then dragged AGAIN all the way through the forest to some lodge. At least it was comfortable, even if she still couldn’t concentrate on anything.

It would do for now.

In the years that had passed, the Basin of Life had become used to seeing the sudden apparition of Astral power. But unfortunately, that didn’t mean it was any the less disorienting.

Snakes. Colours with smells. Slime, everywhere, everything. Cracks and impossible shapes and the paranoia of loneliness and the ceiling a floor, the floor a ceiling. Thick clouds, xanthic and nauseous, obliterated the sky as the world tilted.

And into the world, they deposited six familiar portals.

When they landed, Asaami was mid-rehearsal, practising her most recent trick – causing flame to skitter across the surrounding walls and ceiling without setting them alight. It was a difficult move that had gone wrong more than a few times, which made it no surprise that the sudden thrum of the floor caused her to fall amidst burning wood.

Her master charged in and helped her put out the fire, then demanded to know if she was herself. And in that moment, Asaami understood what the shaking had been – what had returned. She didn’t remember a great deal of her time as a portal keeper, all those years ago. In fact, she had done her best to forget it.

But when she walked outside into the mountains, and looked up at the distant portal, she knew it was the same. Only this time it hadn’t required her power to make it appear. She stepped forward as if to approach it, and then scattered as a dozen impossibly monstrous creatures rounded the corner.

At the other portal sites, similar scenes played out. First to locate a portal was Lorina of New Celest, who found one in the Oleanvir Valley and decided to see where it led. The resulting images tore at her mind, somehow worse than the fact that she had ended up in the Astral Plane.

Most people set to defeating the creatures, more than a few viewing it as a strange game of bingo and attempting to catch as many as they could in sketches and paintings. Then, in a breakthrough more accident than design, Anita of Hallifax discovered something unexpected: if you placed the corpses of the creatures into the portals, they overloaded. If you did it enough times, they ceased to summon creatures.

Thus galvanised, she began to spread the word to others.

But few people answered the call.

In Magnagora, Mrak n’Kylbar contacted Uzriel i’Vipere to discuss the situation and the possible raising of the Soulforge. They travelled together to the bowels of Great Muud, hunting for the tears of the Sleeping Child, whilst Uzriel pondered whether the visiting viscanti was the most dangerous prisoner that had escaped from the Splintered Mirage.

Serenwilde looked to the care of Constance and Elsa, moving them to a neutral location further from many of the portals – the Tosha Monastery. They spoke with Master Quettle and gained his permission to lodge the refugees there.

To the surprise of no one, Hallifax pondered the science of extra-planar portals: the creation of them by persons other than the Elder Gods, and the amount of power necessary to maintain not one but six of them.

Laur of New Celest experienced a terrible vision of Almighty Kethuru himself, and showed initiative by taking the information to the city’s newsboard, accounting his experience and worrying about what it – plus these strange portals – could mean for the First World.

And in Glomdoring, there was a play rehearsal.

Many other organisations put themselves to the hunt, slaying not only the creatures but hunting down the portals themselves. But very few of them save for Anita herself actually closed any portals – indeed, eight long days spanned before the second portal was closed, by Tekora Windwhisper. The third, fourth, fifth and sixth went in a heroic surge of effort by Dys Mzithrei.

But it could not undo the days that had passed. Over two hundred creatures had surged forth from the portals by that point, and those who were not killed set about their task: to make their way to Avechna’s Peak and weaken the Nine Seals.

Not even that, but when the portals were overloaded, they would eventually reform.

Fortunately, groups soon started to gather and see the abominations off, but communication was low. Glomdoring formed a squad that cleaved through the creatures, spotting that they headed for the Seals – but did not know where they came from, nor how to close those portals.

Serenwilde visited the still safe Constance and Elsa, bringing them gifts, and theorised with the Maiden of the Moonhart about what the phenomenon around them could mean. Uzriel of Magnagora sought out Sirsia Pois, speaking to her of her master’s plan – but gaining nothing from her save that he was “Fated”.

And more and more creatures got through.

Maendwen Syllamn was not a brave woman. She found solace in her waystation, in her work, and that was that. The strange goings on and adventures of the Basin were not hers to be concerned with. But, as everyone who lived by the Ackleberry triple junction knew, sometimes such things could not be ignored.

It was comforting to know that someone thought to defend the highways. So few people did. She watched the man and his friends as they traipsed back and forth, clearing out the creatures and then catching the ones that had run past him. In Maendwen’s admittedly untrained opinion, it looked as if they were doing a wonderful job.

Of course, neither Maendwen nor Remmiel were watching the other entrance to Avechna’s Peak – for there were two, a fact realised only too late. Left unwatched, a slow and steady line of creatures made their way up that side of the mountain, the Seals in their sights. Amidst them was a single wretched damsel, tattered and bloodied, determined to reach her mark.

When she did, the Seal of Knowledge pulsed so loudly the whole world heard it weaken.

← The Cards That Tumbled DownWatchers Wake to Fight the Fears →