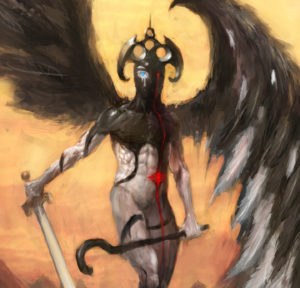 Safely ensconced in the Tosha Monastery, Constance Walker was not idle. She had assured her allies in Serenwilde that they could work on curing Elsa without needing to return to Duum, a message that had been passed through the commune’s alliance to reach Tekora Windwhisper. Ably assisted by the more knowledgable Avalni D’Varden, they began working on a cure.

Eventually they spoke to those of Glomdoring, who remained vigilant over the wellbeing of the two members of the Humanistic League. It was Xenthos An’Ryshe who eventually completed their collective quest to cure Elsa Fallows, returning her and her books to a very relieved Constance.

Meanwhile, others worked to closed portals and guard the way to Avechna’s Peak, attempting to ensure that there would be no further weakening of the Nine Seals. However, a protracted battle between many of the organisations distracted from much of the work, and allowed many more creatures to assault their targets.

Since the strange incident where she had supposedly attacked visitors to Duum – an incident she could still not recall – Wanda Murkle had been quietly conferring with the rest of her family. There was no doubt in her mind that the strange clouds and the strong presence of a Soulless upon the Basin was a sign from the Great Master.

But her would-be minions in Magnagora had not yet succeeded in slaying the cloier. It would prevent the usual rituals. No, what Wanda needed was something…greater. Something more rapturous.

And so she knelt for days upon days in prayer, opening her mind to the visions thrust upon all by the closeness of the Astral Plane. She welcomed the oozing floors and the hissing snakes and the flames. Little by little she stepped further into their embrace, attempting to offer herself entirely to it.

As the Chaos Seal grew closer and closer to weakening, the Great Master answered her call. She felt herself lifted above the Basin of Life, a blissful agony overtaking her body. No transformation she had endured had been like this before – this was more. This was rapture.

This was His Avatar.

First to be the unwilling targets of the now-manifest Dread Lord of Contagion and his hitsquad of blighted champions were the city of New Celest, who weathered the attack badly. Next were Glomdoring, who withstood the short and brutal attack before the Dread Lord and his squad departed.

As a full squad they never remained long, striking with only a scant few seconds of notice before hitting hard and then vanishing. Sometimes the Dread Lord would send simply his minions, who fought to the death, many falling to the group of them as they appeared at all manner of locations throughout the Basin.

Shortly after this assault began, all six of the portals through the land reopened simultaneously and outside of the normal time to which all had become accustomed. It seemed to be a part of the plan: to sow chaos with the tough-hitting squad whislt the minions did their work.

Many also theorised that the Dreard Lord was attempting to attack the Nexuses of Power, a theory quickly undermined as he targeted not only the large groups at the Nexii, but other groups in the Undervault, elsewhere in the cities and communes, and finally at the Triple Junction.

It was on that junction of the Ackleberry Highway, at the base of Avechna’s Peak, that the Dread Lord met his demise.

A large group led by Remmiel Strongleaf and Xenthos An’Ryshe stood there, a prime target for the Dread Lord – and his ultimate downfall. The champions with Great Muud’s Avatar fell quickly, and it was Xenthos who struck the killing blow against the mighty manifestation of blight. His body crumpled to the floor, glowing unnaturally even in death.

The people of the Basin began to busy themselves with the portals and their charging minions, sweeping them clear and doing their best to save the Seals – which, in the case of some, were now hanging on to their power by barely a thread.

Then, some time later, the Dread Lord of Contagion resurrected.

Dowager Shelagh Shee-Slaugh was accustomed to visitors to her realm. Wydyr was a place of significance, and it was only right that many come to visit it and make supplication. Those of the Glomdoring, especially her family, tended it well and with care. Those of the Serenwilde came with suspicion, but – in her opinion – could rarely deny the power of the Wyrd that was evident in the boughs of the Glade.

So it was not a great surprise when a group arrived, led by Crek Ysav’rai of Glomdoring. It was the nature of his entourage that was curious, for amongst them were two human women. Gleeful at the opportunity to eavesdrop, the redcaps instructed her that the group had headed there for safety, hiding from the Dread Lord of Contagion.

But, as it transpired, it was not just the Dread Lord of Contagion that the group ought to have been concerend about. A rookie error, in the Dowager’s opinion. Fleeing from one enemy gave your others a wonderful opportunity to take advantage of your weakness.

It was Kalas Cyna of Magnagora who proved to be the second enemy. In a short, abrupt attack she slew Constance Walker, the woman barely getting a chance to retaliate. Quick to think and act in the confusion, Crek gathered Elsa and made a hasty exit from the Wydyr Glade, seeking a safer haven for his one remaining charge.

“We are not exactly in the business of ‘protecting’ people or keeping anyone ‘safe’,” the one-eyed keeper of the Mirage Prison pointed out. “If you want me to imprison her, then once order has been restored she can join the rest of the prisoners.”

Elsa Fallows was confused. Again. It was starting to become a habit. But everything had happened so quickly – first she was looking at the pretty frozen spire thing, then Constance was DEAD, and she was chasing to keep up with a man who seemed to caw more than he actually spoke common.

And now she was in a place MADE OF FLESH and they were talking about putting her in A PRISON?!!

She tried to pay attention to the conversation, but much of it was going over her head. They were talking about laws, or law at least, and that she ought to stay in the Prison and be safe and keep others safe from her because she had summoned a Dread Lord? Wait. She hadn’t done that, right?

Elsa collapsed into a corner and fell asleep.

← Renounce Ascent or Face DemiseApocalypse Has Come to Call →