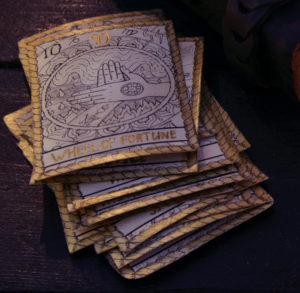 The appearance of Verses of Magnora had become commonplace. In a scant matter of years, one after the other after the other had been uncovered, often heralding events that transpired soon after. But no matter how routine their delivery became – always taken to places or people of import, and always with talk of keeping a promise – there were few adventurers in the Basin of Life who did not think their volume strange.

And so, when he discovered a scrap of blackened parchment in the destitute ruins of Malacoda Manor, the treasure hunter Tarel was given pause. He carefully extricated the small chest in which it had been found from beneath the pile of rubble, and cradled it in his arms as he took it away for study.

Now Tarel, being focused in his studies upon history, had never taken a great deal of time to learn other languages – let alone to read Divine script. Although he knew beyond a shadow of a doubt what he was holding, and how ancient and precious it was, he had no idea of the true value of the script itself. So, being an enterprising scholar, Tarel decided to take it to someone who could help.

His thoughts turned first to Magnagora, for it was there that the family of Malacoda had originated. But then a stray memory of pain and sadness wracked him, and he did not think of them again. He thought of Glomdoring, and the terrifying shadows; of Gaudiguch and their relentless revelry; of Hallifax and their science; of New Celest and their imperial might. Deciding that he did not wish to meet any of those fates, Tarel went to Serenwilde.

There he was accosted by the ranger Caedir, who was on edge when it came to visitors. Tarel began to rethink his decision and consider New Celest again, but he was quickly relieved by the appearance of several adventurers. Lief, Vefai, Sondayga, Ramilies, Eadeol and Avalni arrived to meet him, and to take from him the Verse of Magnora that he had discovered.

None of them paid much mind to his tale of woe and misery, the half dozen things that he had broken that morning, not least of which was his favourite tankard. But his task, at least, was done. And so, the weight of Fate no longer puppeteering him, Tarel returned home to Malacoda.

Magnagora had received many visits from the curious viscanti nobleman and his rhythmic, tapping cane over the past years – almost as long as the Basin had been receiving promised Verses of Magnora. Each time he came, they found themselves left with more questions than answers, more frustration than catharsis.

This visit was no different. The viscanti, wings folded behind him with poise as ever, gave no clear reason for his visit as he spoke with Kailanna n’Kylbar. Indeed, he said very little of anything at all, save to thank them for their time and express his trust in their good judgement. The two were watched by a largely silent audience, who observed his mannerisms with scepticism.

They voiced their thoughts only after he had departed, pondering on his lineage, his purpose and his relationship to the spies who had supposedly worked for him – for whose wellbeing he seemed to have little more than disdain.

But, as ever, there were no answers.

Constance Walker had not had the best few years, all told.

It wasn’t that the work was terrible. She found the humans of Duum incredibly interesting, for all that they were unsettling and unpleasant at times. She even, to her astonishment, didn’t mind working so closely with her assigned partner.

…except when she became obssessed.

Because, as Constance had come to learn, Elsa Fallows did not do things by halves. When Elsa put her mind to something, she hurled her entire body in after it. Was it time to request another partner from the Humanistic League? Perhaps. But there were more greater concerns: Elsa’s obsessions were becoming worse.

For years now the two of them had danced round this awful cycle. Elsa became curious; Elsa became ‘inspired’; Elsa became…not Elsa anymore. And no matter how many times Constance fixed it with the help of others, Elsa’s obsessions would always come back. Only this time they were different. Worse, even. This time, Elsa was trying desperately to remember something.

Constance had always considered it a blessing that Elsa remembered little, but now it seemed it was driving her mad. Something had to be done. So Constance did as she had done before: visiting the communes and cities of the Basin of Life to seek advice and support. To tell them of Elsa’s strange obsession, and her fear that if left untended, it would only become worse.

She went to Hallifax, and met a large number of citizens. They questioned her at length about Moana Cracy and the Unity plague, to which Constance pleaded ignorance, before leaving without help. In Gaudiguch, no one seemed to know what she was speaking of – but they promised to come and check on her, though she never received such a visit. In New Celest she spoke to Lorina and Romaan, who – to her great relief – recalled who she was. But even they did not help.

In Glomdoring, she thought she had managed it. She spoke to Xenthos, Rancoura and Crek, who not only listened to her but travelled to Duum to speak to Elsa directly. They watched her obsession and considered it at length – hearing her desperate request to be ‘inspired’ again. But Glomdoring were not fools, and they knew what Elsa’s inspiration would mean. They remembered plague and puddles and the relentless need for a cure. So they departed, leaving Constance forlorn.

Then she went to Serenwilde. Weary and desperate, Constance was first accosted by Caedir, who it seemed remained on edge since Tarel’s visit. There she met Faythe, who recalled her, and in her desperation Constance echoed the idea that perhaps the best thing would be to inspire Elsa so that she could remember it and it would all be over. She did not expect them to consider it.

The group of them, Faythe, Orimi, Elissata, Minkahmet and Vefai, travelled to Duum to induce Elsa’s drugged state and discover her obsessions. They learned that Elsa had been visited by someone in Duum, someone who said that a power even greater than the rapture was coming. Someone who tried to coax her into joining that power, to aiding it, to giving herself over entirely to it.

It seemed, at once, like a monumental discovery – and nothing of any consequence at all.