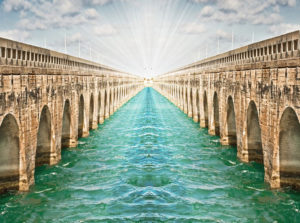 Though not immediately noticed, a dead fish arising from the foulness of the Sea, gave Velho Caleb Luminare much pause and he immediately requested guidance of his fellow citizens. Student Laurent and Duchess Auriella took to arms with many questions, but more urgently, seeking solutions. Laurent began by speaking with Lanikai, who seemed to not understand how the waters could be so foul yet she felt no illness herself. Caleb turned to Skerriagh, the Lord of the High Tide who found nothing amiss. The puzzle grew as answers diminished. The Duchess Auriella felt action was needed and journeyed to the Cay of Cloadahi, ensuring it remained loyal to the Light.

After days of little success, a young voice sounded across the aethers, Walt was needing help at the Pool of Stars.

Unused to such commotion, Melothi Faran was nervous, shy and stuttering as everyone arrived and rallied around her. Living on her own for much of her life, the only other individual she ever knew was her mentor, Gelane Nerale, and he passed many years ago. But, she said, if ever there was a day when the Inner Sea would become tainted in its entirety, he had a plan and bid her to accept the burden of it upon his death.

The schematics she brought required a great deal of materials to construct, but she was certain of its success. It came from her mentor, right? Who would not trust their own mentor’s word?

Duchess Auriella funded the entire project with a large sum of resources. Everyone was extremely friendly, despite her shyness, and Melothi decided to make New Celest her new home and rejoin the world at large. Meanwhile, she worked on the machine diligently to help her new friends and home, and finish her mentor’s work.

After a day of interpreting schematics and fitting the pieces together, the dome contraption was ready by the shore of the Inner Sea. Despite its swift construction, Melothi Faran explained that it must be primed and the only thing which could counteract the taint would be light essence, and quite a lot at that.

A veritable army of fervent Celestians, including Prince Kreon Zayah, Velho Caleb Luminare, Student Laurent, Duchess Auriella and Deaconess Varel Luminare, then took to gathering essence on every Plane available. Despite attempts by Countess Kalas Cyna to thwart their efforts by placing dark essence in the machine, with the additional efforts of Earless Aeldra Ladyn, Father Kagato, Earl Slunk, Duchess Saoirse Kissane-Ladyn and Earl Tridemon Regalis, the contraption was primed with one thousand light essence and the Inner Sea purified of its foul taint.