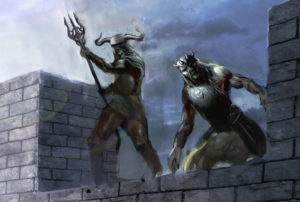 Grumbles and grunts echoed across the Basin as gruff orc-like voices shouted about their hard work to the unmoved demands of an orclach. Spirit Warden Xenthos An’Ryshe, Spider-tender Athree, Chaplain Marcella n’Lochli were the firsts to arrive, soon followed by Countess Kalas Cyna. The orclach in charge, Hethklyff Ruag, explained the incompetence of the hired orcs and their refusal to continue to dig having hit something “too ‘ard master”.

Soon the excavation site for Hethklyff’s new home was a flurry of mud and dirt, as everyone helped dig in. Layers of gravediggers upon gravediggers and rockeaters did not deter the noble adventurers! Even if they stopped the meek and bumbling orcs. From beneath the rest, a heavily scarred chest rose the surface covered in dirt though still locked through the ages.

At first making claim to the item, Hethklyff saw its worthlessness and let the helpful group around him have it. With no alternative at their disposal, each attempted to break the chest open. After resisting several attempts, the chest broke open and disintegrated while a blackened parchment fell to the ground from inside. Far too fast for anyone to realise until too late, the Countess absconded with the parchment with many thanks to Hethklyff for its discovery.

The mighty orclach was grateful for their assistance, with worried remarks about his wife’s temper, and thanked everyone. To further assist, shovels were provided and the bumbling, clumsy orcs were removed of their addled flesh brains in favour of animated skeletons to Hethklyff’s approval.

Still today Hethklyff digs for the day he will bring his bride to a brand new home, made by his hands, but what did he care about a worthless chest and some old parchment…? Perhaps that parchment was worth something after all like that one fellow, Laurent, later explained?