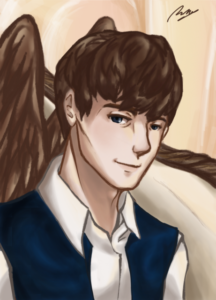 Check out the new website. We’ve updated the entire look and feel which should be sleeker and easier to navigate around. Most especially, the new Portal page is an easy access interface to view in-game news, messages and logs. Unfortunately, we have not yet been able to resolve the artisanal/bardic section and therefore are pausing these contests until we come to an arrangement that works best for everyone. Note that we will probably combine the bardic contest with the library contest and keep it all in-game. Be sure to check out the audiobooks in the history section, which includes those previously unreleased!

The biggest and most exciting change in Lusternia so far this year was a complete reworking of the guild system. No longer does a guild represent a class which populated city and communes with 4-5 guilds each; rather, there are now three guilds in each major player organization, representing a specific outlook and philosophy. Any class can join any guild, which means the guilds are much more roleplay-centric, representing a true political or social faction.

When the Tide Lords on the Elemental Plane of Water began churning with displeasure and malcontent, New Celest was threatened with the terrors of the Red Tide. Read more on the entire story. The events that took place destroyed the old guilds and gave birth to the three modern guilds:

Commune of the Serenwilde Forest

Dark prophesies followed the marriage of two centaur elders in the Serenwilde Forest, revealing an ancient enemy of the White Hart known as the Black Striped Warrior that plunged the forest into bitter war. Read more on the entire story. In the aftermath, the three guilds that now comprise the forest are known as:

When the dark bells tolled at midnight, a sequence of events in Magnagora led to the discovery of a curse so dark and unnatural that it broke the city itself. Read more of the entire story. By manipulating dark prophesies and through will alone, the citizens rose from the ashes to form the three guilds that now reside in the Engine of Transformation:

When static interrupted the Celebration of Innovation, glitches and malfunctions in the Crystal Resonance Tower threw the entire City of Hallifax into disharmony, heralding a failure cascade that threatened to plunge the floating city to the ground. Read more of the entire story. Through precise logic and orderly administration, catastrophe was averted and the Collective reformed into three new guilds:

It started with an unwelcome guest that turned into a horde of unwelcome guests. When the Great Pyramid exploded, Gaudiguch knew that the horde of butterflies released could only mean one thing: violent change on a grand scale. Read more of the entire story. Riding the wave of chaos is the one thing the City of the Free know how to do best, and they rose from the ashes to form three guilds:

An ancient Fae legend stirred in the Glomdoring Forest: the greev, named reaper by the Fae, the culler of that which was weak and unworthy. One by one, the weaknesses of the Glomdoring Forest either fell to the skittering nehvgree or were transformed, becoming greater and stronger for their encounter with the reaper’s might. In the greev’s wake were born three guilds, nurtured by the corpses of that which had gone before:

Duum for the Humanistic League

Deep in the dark muddy waters of the Balach Swamp, the Humanistic League delved into mysteries better left uncovered of what became of the human colony lost so many decades ago. Unfortunately what they discovered was a secret so hideously corrupt and terrible that it threatened to swallow them and the entire Basin of Life into madness. Read more!

Battle for the Wheel

The Wheel of the Goloths is an artifact from the Vernal Wars so dangerous and malevolent that it bends time itself. When the artifact activated and released sileni and nagasith from the past, not even the Time Dames could stop the disaster unleashed. Could the stalwart vigilance of a certain tae’dae and his compatriots save time itself? Read more!

What could the omens be when a strangely unusual number of sparrows descended on the Serenwilde Forest raising a haunting harmony of birdsong? Alas, it led to the bittersweet fate of the Voice of Trialante who still resided in the ruins of the fallen Spiritsinger Guildhall. Read more!