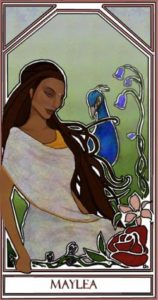 In mid-year 535 CE, the Serenwilde had an unexpected visitor: While sewing some new attire for herself, Lief Myeras was visited by shadowy figure with a pair of oval, green eyes, who did not stay long, but left behind a single bouncing muku ball. Lief, though behind on the news, soon learned that the muku were the signature fauna grown by a sharded race named the kaelye, who dwell upon the aetherbubble Lyraa Ey Rielys, and who were featured in dire events years ago: when Lyraa Ey Rielys was on a collision course with Lusternia itself.

Like his predessor Taimi Kivinen, this visitor was reticent and reclusive, needing much coaxing to interact, and his language skills, though passable thanks to Taimi’s coaching, nonetheless left much to be guessed. Despite the barriers, Lief soon learned that this kaelye, by the name of Lanni Ahonen, was looking for the Elder Goddess Maylea.

Through the subsequent months, Lanni came and went in the Serenwilde forest, interacting with others who sought to help him, including Pysynne, Kaiel, Aruokei, Millien, Verrix and Ani. Lanni learned more and more Common, and discovered a particular liking for cookies. But throughout, Lanni again and again sought to speak with the Bloom of Serenity. Accordingly, those who followed the Goddess among the Seren prayed to Her with much sincerity, and thus Maylea was called to Lanni’s presence.

It is said that Lady Maylea showed Lanni Ahonen remarkable kindness in their first meeting, though She soon retreated to meditations upon hearing his request. All was quiet for some months.

In Tzarin of 536 CE, Serens noted a particular concentration of Maylean devotees gathered in Her Temple. None but those who follow the Goddess know the full of what transpired within, but there are rumours that pass among those of the botanical persuasions: that the muku plant, which had heretofore been flowerless, has bloomed for the first time in all the ages of the worlds….

And what has happened to the kaelye, Lanni Ahonen? Only the Mayleans know.