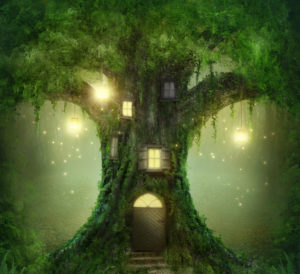 One windy morning in the Serenwilde forest, there came a strange whispering. Almost indecipherable at first, it echoed throughout the forest and drew the attention of those gathered at the Mother Moonhart. Daxi Strongleaf and Aydeksa Mzithrei were first to hear it, with Coraline Myeras returning to assist in their search thereafter.

The three of them searched Serenwilde and beyond, speaking at times to the various residents of the forest. From Miakoda they learned that the voice was not malevolent and that it came from outside the forest. From Teharo of the Listeners they learned that it was a spirit, and one whose voice was far clearer to those who stood tethered to that plane. But it was the Ranger Caedir who told them the voice was coming from the northern mountains, and so to the mountains they went.

It was a boreal grove that they descended into, one long abandoned, and there they retraced the steps of its long-dead resident. Though they were initially perplexed as to how to do so, soon Daxi and Coraline were working together to live a day in the life of Ilmdria Farirue, not knowing what they might find. Ryves Moonblade came also to assist them, but it was Daxi who ultimately made the first new entry into Ilmdria’s long-lost journal.

Though she would later lament missing her chance at immortality through prose, Daxi was nonetheless successful in using the journal to summon the spirit of Ilmdria. As the three women conversed, they realised that Ilmdria was the closest friend and soultwin of the legendary Toledil – a poet who was known for many epic works, amongst them the Darkseed, which chronicled the life of Banon Strongleaf, and the tales of Cora Wildbriar, which Ilmdria’s spirit had called them to the grove by reciting.

And though in time the spirit of Ilmdria would fade again, many questions remained. What other works might the spirit remember? What other ancestors of the Serenwilde, forgotten in all but Toledil’s works, remained to be discovered? And why do magpies have such a fondness for blueberries?

← March 2019 NewsletterMemorial Water Gardens: A Tale of a Tail →