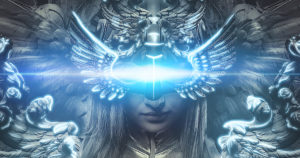 It was late in Estar, 527 CE that Milosha Novikei and Yanitone Symfale of New Celest announced the official opening of the Memorial Water Gardens, a project that had been under construction for many years. The opening festivities were attended by citizens of all walks of life, from Prince Minkahmet D’Varden himself to a fisherman interested in learning what varieties of fish could be found in the new garden’s pools. Not to mention the cat.

Qoivhae Vivalde was the first to volunteer to perform the Ceremony of Remembrance in honour of the victims of the Shanty Town Massacre. Some assisted him in this endeavour, while others admired the gardens, and recalled the devastation wrought by the wights, telling the tale to those citizens too young to have lived through it. At last all the witnesses for the ceremony were gathered, and the fountain lit up like a beacon.

But, rather than the angelic spirit caretaker Milosha Novikei expected, the beacon instead drew the attention of a large angelfish, to the great excitement of the attending fisherman. After learning of the intentions of those gathered to remember all the victims of the massacre, the angelfish transformed, and Carakhan, Sculptor of Waves revealed Herself to the Basin once more.

For a time, She indulged the curiosity of those gathered, mentioning that She had been journeying to learn what had become of places and items once dear to Her after the millenia She had spent within the bubble of Aquagoria, but at least She departed to rest, and ponder the works of New Celest.