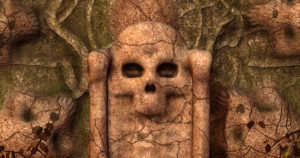 There can be no life without death and, on the 7th of Vestian, 524 years after the Coming of Estarra, the Challenge of Death would choose its Sealbearer, the one who could spread the gift of the final sleep furthest throughout the land.

Many challengers took to the field to drench the earth in blood, notably Steingrim, the Warlord of Gaudiguch, Shango D’Cente of Magnagora, Jolanthe Rithel of Gaudiguch, Kalas Ixion of Magnagora, Tridemon Regalis of New Celest, and Holy Matron Lorina, also of New Celest. But Yendor Stormcrow of the Dark Forest of Glomdoring took an early lead by wielding his nekotai claws and carving rivers of blood through mountain, field and valley.

While Steingrim the Warlord roared and scythed through bodies with reckless abandon, he was ultimately not able to match the bloody terror that was Yendor Stormcrow.

Congratulations to Yendor Stormcrow, Bearer of the Medallion of Death!