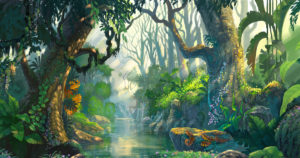 Early morning of the 16th of Juliary, 523 CoE, saw challengers gathered at Avechna’s Peak to take part in the Trial of Nature. Receiving a peculiar bioengineered plant, they have set off to cleanse the Basin of Life from remainders of Lyraan presence to strengthen the Seal of Nature.

The first to find a clue was Kish but it was a while before anyone, including Kish, figured out their clues from that point onwards. Afternoon came by the time Dys Mzithrei, Tarken, and Ayisdra made any progress and it was almost midnight before Unitos and Allixea made their first finds. Then, as night reigned, Dys took a sudden lead and did not relinquish it even come dawn. Ayisdra Ysav’rai and Steingrim La’Saet sought high and low during the night but they could not overtake her.

The next day begun equally slow, with Vatul Feyranti, Nerai, and Ilthilior n’Lochli joining the trial. By late afternoon, Steingrim and Alaksanteri both have made progress but Dys has remained in the lead. By the evening, Steingrim has made a leap ahead, almost matching Dys, as did Nerai. As the night came, Ixion has made his first find.

As the Sun welcomed the land on the third day, a sudden surge landed Steingrim in the lead, with Dys, Tarken, Ayisdra, and Nerai right behind him. As morning passed, Steingrim’s lead grew but Dys would not be left behind. Others rallied throughout the day but Allixea made the largest jump forward, matching those in the lead, and then overtaking them. By dusk, however, it was Dys who was back in the lead and by a significant margin. It was not long then when she, despite all the ups and down, was victorious.

The following prizes were also awarded: