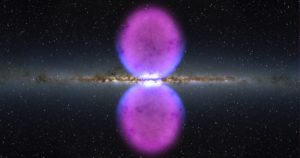 A droning, sonorous hum filled all of Creation, cresting into a wave of vibrations that shook reality itself, blurring everything for a split second. The pressure that had been so present over the past months returned, even stronger than before.

Throughout the cities and communes, the Keepers of the Nexii strained, as did their charges. And one by one, the nexii surged, casting out the power that had been so devoutly gathered by their servants and sent forth to bolster the boundaries of reality.

Combining into one, it seemed that this great power from the nexii was enough to stabilise things – until the sound of aethership engines could be heard echoing through the Prime Material Plane. Something tore across reality, and as it tore over all things the Nine Seals of the Domotheos cracked and began to falter.

An Ascension would have to be held – but this was the least of the Basin’s concerns. For somewhere in the centre of the Basin, a stretch of wildlands disappeared. Vanished, as if it had not been there. Whilst people began to search the land near the kaelye camp, which had seemed close to the strange occurrence, a booming gnomish voice echoed across creation.

“Here is the truth,” proclaimed the woman known as Queenie. “The purpose behind my actions: I am saving the world. Without my device, this ridiculous Aetherbubble would have collided with the Prime Material Plane. I would tell you where to send your thanks, but alas, time goes short – and I have business to attend to. Goodbye. I’m afraid we won’t speak again.”

As her words echoed, a second collision happened – between the Prime Material Plane and the Ethereal Plane. The displaced wilds, it seemed, had impacted somewhere else.

After this the Basin and the Aetherways alike became a hive of searching. Many in New Celest and Glomdoring took to Aetherships to search for routes into the displaced area. Others from Hallifax searched Avechna’s Peak, one especially becoming dismayed at the fractures in the Beauty Seal.

But it was Dys Mzithrei of Gaudiguch who discovered that the tree in the kaelye camp was a gate to the Ethereal Realm. Passing through it, she located the displaced wilds and the Mining Collective who had been so abruptly moved there, their camp having been in the centre of the wildlands.

Seeing that they were being set upon by Lyraan flora and fauna, Dys in turn set about helping them defend their camp. With the help of Alaksanteri Elithysius, she took care of the attackers, marked the perimeter and prepared the protective generator for function.

The two of them had just left to gather essence the power the generator when Kailanna n’Kylbar of Magnagora found the displaced wilds as well, and was shortly teleported to by Xenthos An’Ryshe. This was the beginning of a tidal wave of visitors, as people from across the Basin piled in to see the displaced wilds.

Dys and Alaksanteri soon returned, and into the generator she placed the hundred essence they had gathered. It flooded with fiery energy, combusting the now-Ethereal wilds around the camp, and ensuring that the Lyraan flora and fauna could not return – at least, until the generator ran out of power.

For her assistance Dys was also presented with a ball of transformed muku, one that had clearly been influenced by the fiery power of Gaudiguch. Those gathered spent some time experimenting and attempting to work out its use, but to no avail. Overseer Hugkegtla of the Mining Collective refused to comment upon it, citing non-disclosure agreements as preventing her from elucidating.

Many came away from the days’ events speaking of the matter as if it were finished: the Seals broken, that seemed like an end of sorts. But many more remarked upon something else: what could possibly have enough power to tear an Aetherbubble off a collision course?

Time, it seemed, would have to tell.