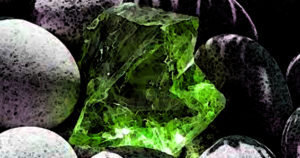 As the world continued to experience a variety of disconcerting anomalies, the sound of shattering glass echoed from somewhere on Avechna’s Peak. A squeak of alarm followed it – and then silence.

Though a number of people explored the Peak to seek out the source of the sound, including a cautious investigation from a distance by Dys Mzithrei of Gaudiguch, it was Coraline Myeras of Serenwilde who stumbled upon something strange within the Peak.

Whilst standing at the Aetherplex, she observed a gnome in a white suit stepping out of a portal. Their exchange was brief, with the gnome – thuggish and rude – telling her not to worry, that it was just business, and to run along now. Then the thug left the Aetherplex, passing Ayisdra Ysav’rai of Hallifax on her way, making no further comments as she passed.

Understandably concerned by the altercation, Coraline spoke first to Ayisdra and then to Kogon of New Celest, who in turn relayed what she had seen to his city. But thus, it seemed, ended all thought upon it – for no one chose to investigate or communicate further.

As rumours of the gnomish thug reached the Basin of Life, a pair of intrepid adventurers set out to investigate the situation on Avechna’s Peak. First to sally forth was Athree of Glomdoring, who travelled to the Aetherplex to seek information.

He ventured early on into the ship of the Starhopper, and spoke at some length with the Captain, asking her about the strange pressure on the world and whether any creatures had been acting crazily nearby. He asked if her crew were missing anything, but she said that apart from the Professor breaking his wine glass, that had been all.

Athree did then go onto speak with the Professor himself, but von Fixit proved monosyllabic in his responses, uninterested in conversing. He noticed too the shard of glass still tucked to one side of the Professor’s room, but neither picked it up nor investigated it. And so it was that Athree left the Starhopper, and joined by Xenthos An’Ryshe he headed off to search the rest of the Peak.

The two of them interviewed many of the Avechna’s Peak Merchants Coterie, learning that the gnome witnessed by Coraline had headed both up the peak and back down, eventually tracing it back to the Aetherplex – and the Starhopper.

There, Xenthos found the broken glass and had a more productive conversation with Professor von Fixit – at least, once his pet leopard had bared her teeth in the gnome’s face the man was much more forthcoming. Even still, he would say very little, only making clear through sweating and fidgeting that ‘she’ would do far worse things to him than anyone else could.

Certain that they had uncovered a Gnafia plot, Xenthos and Athree made some other investigations on the Facility and Bottledowns, but confirmed little else – where, about the same time, Spinner Afollia had noticed that it was getting hotter. A lot hotter. And not just on the Prime Material Plane.

← A Catastrophic Collision and the Conclave of the KeepersA Collision Averted, and Wilds Displaced →