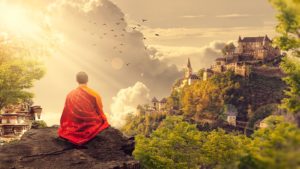 With the departure of the kaelye to their homeland, there seemed to be as many questions around the years-long events involving the flora and fauna of Lyraa Ey Rielys as there had been answers. The Basin of Life, as it so often does, had fallen into the tension of waiting. Waiting for something to happen.

When it came, it was at first a distant, piercing sound. As this sound grew, the Nexus Keepers – those women and men devoted to guarding the Nexuses of Power raised at the heart of every commune and city – began to experience extreme discomfort. Pain, headaches, and even in one more unique case the hangover to end all hangovers, their trauma was only the beginning of what was to come.

In a flurry, the Basin experienced a series of disconcerting events. Vertigo, dramatic changes to gravity, quakes that shook the entire Plane from earth to sky. At one moment, another land was even visible through every clear surface, every reflection – a place of jagged rocks and purple stormclouds.

Things settled, but only for a moment. Then there was a crash, almighty and all-encompassing. The thousand linorii that had come to call the Prime Material Plane screamed out in agony, and their lights were reflected in the sky. There was a great pressure upon all things, surging and attempting to crush the plane.

Reality asserted itself at last – but the strange phenomenon remained, even if far weaker than the initial cataclysm.

In the wake of these events, the Keepers of the Nexii continued to be unwell. Determined to get to the bottom of what was happening, Ardrak of the Megalith invited the other Keepers to converse with him on the matter. But only Fraesic Sunfar, Keeper of the Matrix, responded to his plea. The two of them spoke with Kailanna, Ixion and Vatul on what had happened, before Fraesic returned to Hallifax to report to citizens Kish, Goldia and Doman.

In Gaudiguch, Genthus, Tortuga and Alaksanteri spoke with Mesadari about her hangover, before Genthus travelled to New Celest to share the information with others. Tortuga travelled to the Fire Plane to speak with Agni, the Lady of Smouldering Embers, who reported feeling the same sense of great pressure. Thus better informed, Unitos of New Celest spoke with the Holy Supernal Japhiel, who shared concern that something was gravely wrong.

More curious was the visit paid by Keeper Miakoda of the Moonhart to the Master Ravenwood Tree. Protected by the light of the Full Moon and travelling only in a projected form, Miakoda shared her concerns with Brennan – or at the very least at him – whilst Eliron, Xenthos, Deichtine, Athree, Rancoura and Torgaddon observed. At length, the two of them agreed to attend a full meeting of the Keepers if the location was acceptable – until the phase of the moon shifted, and Miakoda made a hasty exit.

And slowly, one by one, the remaining Nexus Keepers were coaxed and cajoled and encouraged into attending the meeting – which would by mutual agreement be held in the Grey Moors. Though not all of them had the purest motives for attending, they nonetheless agreed, spurred on by their concern for the threat to the Prime Material Plane and their charges.

The Conclave of the Keepers was attended not only by long-distance projections of Ardrak, Brennan, Fraesic, Meleris, Mesadari, and Miakoda, but by representatives from all the cities and communes of the Basin of Life. Tension was evident from the beginning, with the Keepers trading veiled and not-so-veiled insults at one another while attempting to collect their information and come up with a solution.

They noted that their Nexii have been experiencing fluctuations and yet with no deviation in power levels, as if the pressure upon them from the neighboring planes had increased. Some present suggested that perhaps the problem was something to do with the Elemental Planes, but this was rebuffed by Miakoda, who instead described the disturbances as something happening everywhere and nowhere.

The discussion was derailed for a time by an argument on the topic of logic, and then was further derailed when a bearded dwarven female, Ohmra Umeril, walked into the Conclave. She was soon followed by another dwarf, Narond Jongrun, the illithoid Overseer Hugkegtla, the kephera Tender Chikit, and the viscanti Serir d’Vanecu. Together, they called themselves the Mining Collective, representing each of the mining villages, and they accused those present of not inviting them to the Conclave, to the befuddlement of all, who had no idea they existed.

Overseer Hugkegtla explained in baleful whispers that the Mining Collective had only formed after the invasion of the creatures from Lyraa Ey Rielys, and that their purpose was to investigate ‘the Lyraan problem’. Omhra Umeril then accused the Keepers of sitting around and waiting for a solution to be handed to them, whereas the Collective representing the mining villages was willing to take action to search for the answers. After several digressions by those present into the nature of paperwork and the edibility of kephera, the Mining Collective departed, led by Overseer Hugkegtla, to search for “a spot where plenty of those things gather,” according to Narond Jongrun.

Fraesic then suggested that although it would not be wise to attempt to seal off the outer planes, perhaps the Nexii could be empowered to strengthen reality itself, much like pillars in the structure of a tower. Brennan joked that perhaps mortals should stuff the Nexii full of essence to aid the Keepers in this endeavour, only to find that the other Keepers took his suggestion seriously and resolved, some openly and others less so, to encourage each of their organisations to accelerate the gathering of power for their Nexii. As Fraesic phrased it, “To reinforce the boundaries of reality as pertains to the barrier between the Prime Material Plane and aetherspace.”

The Conclave ended in a spate of accusations and name-calling, each Keeper recalling their projections in a huff. But the beginnings of a plan have been formed: Bring more power to the Nexus of each city and commune to reinforce the structure of reality.

But what really is the Mining Collective, and where did they go? And what in the world is happening to Lusternia?