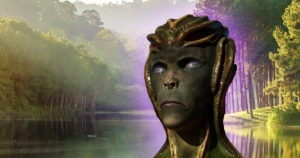 Sentient beings of a brand new race have appeared in Lusternia, following the arrival of the sinkers, the linorii, and garosaurs of months past. Adventurer of Lusternia have made contact with one particular such being, Taimi Kivinen, who stays now with a group her people, who are called the kaelye, at in the crash site of her ship just off of northern Ackleberry Highway. Unfortunately, Taimi and the kaelye only speak their own language and have difficulty understanding the speech of Lusternia. She has made clear thus far, however, that she would like the people of Lusternia to help find her fellow kaelye and to convince and direct them to return to her camp at the crash site.

This month’s daily quest is to help Taimi and the kaelye: To help, look for suspicious rocks and trees that kaelye might be hiding behind and PULL or PUSH them to reveal the hidden humanoid. They will likely run away in fright, but chasing them will eventually wear them down long enough for you to influence them with empower and give them directions back to Taimi. Do this once a real life day to complete your daily quest, which you can track by typing QUESTEVENT.

Completing the daily quest for 16 days out of the month will grant you a special mystery prize! You do not want to miss this prize, as it’s an especially nice one!

Get going and save those kaelye!

← On Weather, Research, and ConsequencesNovember 2018 Newsletter →