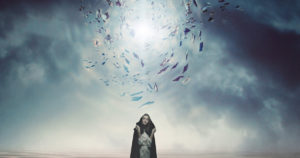 How are you doing? I hope your children are treating you well, and that you are safe? Tell them to forgive their Auntie Constance for not writing for some years. There’s been strange weather in the world lately, and such strange happenings, and not even in Duum Village itself, if you can believe it!

If you remember from my last letter, I was speculating on the rain of elastic balls from the skies and the subsequent growth of the blue-green threads, the sinkers, and the floaters that covered the Sun and made the world cold. I wonder if you had noticed those things back then, and what you think of the more recent strange events now:

Did you hear that a flood of researchers had emerged in the cities and communes of the Basin of Life to learn more about the new wildlife? And here I thought I was studying something innovative, but their names have become more well-known than mine: Kiyan Darkeye, Issrah Miim, Vittoria d’Lardick, Belwen Manchova, Bubbllosh Feilm, and Mapee Thistlefur. They were ambitious, I will give them that.

First, they had sent the adventurers of the world out to obtain samples of a new creature that appeared called linorii, capturing them live via nets or in cages, or killing them via traps or outright. They learned a great deal about the linorii creatures with all of those samples they obtained. Their reports say that the linorii have life cycles, moving from glowbat, to snake, to medusa, which invades the sinkers (the sinkers!) to create rocks, which then explode with more glowbats. There’s more to their reports than that, but alas, this is all the information I obtained so far. Isn’t it amazing? A whole life cycle, and the beginning of an ecosystem? And here I languish in my meagre studies.

But pride comes before fall, and we all have setbacks; from what I hear, those particular scholars had their own. Emboldened by their success in studying the linorii, they set out to learn about another type of creature that suddenly appeared in the world: the garosaur pups. Have you seen them, sister? They are unusual in appearance, with too many eyes than I am comfortable with, but Elsa assures me that they are “ABSOLUTELY CUTE!” in her excitable voice (you know how Elsa is). Well, the forementioned researchers decided to study those pups, getting others to feed them (they eat linorii) until they grow into cocoons, and then collecting and hoarding them. Truly, I am not certain what they were trying to do, and whether they followed the proper research protocols, but nonetheless, their stockpiling backfired on them.

Baby sister, I truly, deeply hope that you have not met a rabid garosaur; I know you can take care of yourself, but I still worry. If the garosaur pups were revolting but “cute”, as Elsa says, then the rabid adults that hatched from the collected cocoons are simply terrifying, and they poured out across the Basin from the scholars’ stockpiles! They look like enormous feathered lizards with too many eyes, and they look like they’re in terrible pain. Most importantly, they have cruel, sharp talons that could rip flesh open like it was paper, and very strong legs. I saw one the other day and had to evacuate along with Elsa to a more sturdy dwelling in the village (amongst the poor, afflicted Duumites), and we waited more than an hour until it wandered away before returning to our tents. Thankfully, there appears to have been a major campaign across the world to slay these dangerous creatures, which catches sparks upon death to pop the floaters overhead and make the weather a bit more bearable. And NO, sister, please don’t go try to kill them yourself! I worry enough about you as it is.

So in the the end, I suppose I did not have the fifteen minutes of fame those scholars had, but I also did not accidentally set loose hundreds of murderous, rabid creatures upon the world. I should call myself content and continue working on my own research among these Duumites. I wonder nonetheless what the next day will bring. Where did these plants and animals come from, and what next will come through?

Recently, I had a brief visit from an elfen named Daiua Greenthorn, who said she belonged to the Elder Goddess Maylea and that she was learning more about the same creatures, and she had the same questions I did. She went further than I did, using a suspiciously modified gnomish gearbox to search for what she called “thin places” in the world, where she heard voices and witnessed strange things. After exchanging pleasantries, she warned me about my own research in Duum and its dangers; what hypocrisy! I’m afraid I lost my temper, and we may not have parted on very great terms. I should have held my tongue before the guest, but alas, there is no benefit to this hindsight!

Some months later, Lady Maylea appeared over Avechna’s Peak (you must have seen that at least?) to talk to this Daiua, and then the Goddess left Lusternia in a hurry, opening and closing a hole in the skies. What power Elder Gods have! And yet, we humans most certainly come from a different and esteemed lineage. I digress: what I mean to say is, I wonder what Daiua said to the Goddess to make Her behave thus?

Oh baby sister, please, if you have any time at all from your labours, please write back to me. I send you letters always in the hope that one day I might hear from you; one word would brighten my heart considerably, and yet all I get is silence!

Awaiting your reply in hope,