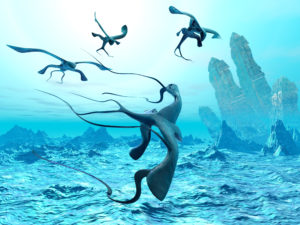 With the glowbat population stabilising thanks to the rigorous research of the Basin’s foremost linorii researchers, each researcher published a comprehensive report based on their findings. With this stabilisation, it was thought that the commune and city members who aided the researchers would have time to relax and review the reports in peace and quiet. To recap who the researchers are and where they can be found:

Anyone who reviewed the reports, however, would realize that the glowbats they had captured or hunted were but a part of this curious creature’s lifecycle. The next stage of the lifecycle, peculiar looking snakes, has begun for the many glowbats left in the wild. These snakes wander the roads and mountains of the Basin of Life, sometimes entangling with each other to form multi-snake creatures called “medusas”.

On top of this new glowbat development, an even curiouser animal has been seen wandering about. Called “garosaur” by the Basin’s linorii researchers, these pups have been seen chasing the muku balls still bouncing about. Muku balls are not all they have a taste for, though, as they enjoy eating the snakes and medusas which have recently proliferated. They are still too young to catch the snakes and medusas themselves, however, so some assistance is needed. Indeed, Lady Nightingale Vatul Feyranti was the first to discover that feeding these garosaur pups to satiation would force them into a cocoon stage.

In the month of September, there will be a daily quest to turn in a single garosaur cocoon to your city or commune’s researcher. Please note that a garosaur will only develop a cocoon about itself if it has been well fed on the linorii snakes and medusas. Doing the daily quest for 21 days out of the month will land you a fortune cookie! You may use QUESTEVENT to track your progress towards the prize.

And for those who aided the researchers last month, be sure to visit them again and read the reports they wrote on the linorii glowbats! There’s no telling what useful information may be gleaned from them.