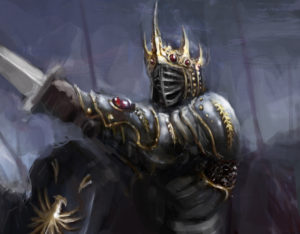 As much of the Basin slept, the Chaos Seal weakened.

More were on the cusp of fading as Lief Myeras-Silvermoon made a valiant attempt to close portals and fight back the beasts – but after much of her toil she was overcome by the madness of the Soulless too much to continue. She ceased, only half the portals closed – and the creatures made it through to weaken the Justice and Beauty Seals without further contest.

Soon, Remmiel Strongleaf returned to defend them, accompanied by Romaan D’Varden of New Celest. They too made an attempt to beat the portals back, but missed the one in Zoaka, which continued to spew creatures towards the Peak. They continued fighting, but they – and the others that they tried to rally to their sides – grew tired.

Life weakened; then Death; then Harmony; then War. Only one Seal remained.

Shibesa had largely ignored the sleeping girl in her retreat since she had been unceremoniously dumped there. At some point someone would need to clear the human out, but for now all she was doing was sleeping in the corner. She did not strike Shibesa as the kind to have broken the One Law, but the stupid could do many things in their ignorance.

The arrival of people in the Prison did not worry her; many had come and gone from the outside since they had reopened to the Basin. Doubtless, she thought to herself, these people were here to assist as the other visitors had done. She scanned the area with her good eye, but stepped to nothing more than that base level of concern.

This, perhaps, was why in a matter of moments there was a dead human girl in front of her. Two figures stood either side of it: Kalas Cyna and Shango D’Cente. They took the broken and bloodied corpse of Elsa Fallows and left, as Shibesa shouted to alert those of Glomdoring that the girl had been murdered.

Then, shaking her head, she went about the rest of her day. There were greater concerns.

As people slowly woke from slumber to discover Elsa’s death, the attacks by the Dread Lord and his hitsquad of champions resumed. Time passed, and things only worsened. There were too many creatures now to beat back – too many strikes by the champions that felled even the hardiest of adventurers. It was as if they had taken the taunts that they were too trivial a fight personally, and made a point of strengthening themselves.

And finally, the last seal – the Seal of Nature – weakened.

Rising once again to hang high above the village of Duum, the Dread Lord of Contagion surveyed the Basin with a vicious gaze. Beneath him, the remaining members of the Murkle family began to chant, serving as the voice of both the Dread Lord and Great Muud Himself:

In the moments before any answer came, the adventurers of the Basin pondered what this meant. Had it never been the Dread Lord attacking them? Was this really him? What was with the last few years and people coming in bloody disguises all the time?

Then, laughter; laughter that had been heard before, hoarse and hollow and cracked. A nobleman’s voice rang out in its echoes, causing the city of Magnagora to perk up as the one they had known as Kadit drew the attention of the First World.

He acknowledged his responsibility not only for the Dread Lord’s accusations, but for the creatures that were coming through the portals – for the portals themselves – and for the weakening of the Nine Seals. As silver and purple cracks shattered the heavens amidst a golden outpouring of light, he quoted from the Verses of Magnora themselves.

“As you can see…the apocalypse has come to call.”

Unto the Basin of Life the unknown viscanti gave a gift: a gargantuan portal that crashed atop Avechna’s Peak and hovered there. A huge crowd gathered to examine it, all communes and cities of the world represented by the adventurers who began to examine the portal – and, as was tradition, to sketch it.

Curious as to its power or content, Shango D’Cente reached out to touch the portal – and promptly died an instantaneous death, his twisted corpse falling out of the other side. Now very curious, the adventurers gathered closer, though remaining careful not to touch it.

It seemed for a while as if nothing more were to come – until a golden-robed and cowled figure stepped forth, a fleshcrafted monstrosity made in the image of the Dark Emperor. “Ah,” he mused, beginning his assault. “Just as the master foretold.”

And so the battle commenced.

The Dark Emperor was no easy foe, weathering the assaults of nearly thirty adventurers for some time – but at length, he collapsed, his essence splitting and dividing into two more creatures. These were made in the image of the Enigmatic Teacher, and they in turn split when defeated too. The Teacher became the Ordained Magician; the Magician became the Megalomaniacal Lust; Lust became the Imprisoned Hermit; the Hermit, lastly, became all manner of permutations of the World.

With no coordination to their splitting, the adventurers quickly became swarmed by the creatures, many dying in the process. Even those who lived found the battle harder and harder over time, as it became clear that even to look at the creatures was to be touched by Kethuru’s madness.

But, in time, the creatures were defeated. Quickly seeing the opportunity to close the portal, the vigilant watchers began to put the corpses they had gained within it. The portal flared with power and so all soon followed suit, piling as many corpses as they could into it.

Alas, it was not enough. Had someone perhaps offered the missing few to the Divine out of habit? Had they gone missing in the flurry? No one could be sure. What was certain was that the portal was not yet overloaded. They would need more – but they had no way of knowing how long it would be before another Dark Emperor came forth. What had even caused its summoning in the first place?

Faythe of Serenwilde thought back, and remembered a corpse tumbling from the other side of the portal. Determined, she touched her own hand to the swirling vortex – and as the life was sucked from her body, a second Dark Emperor stepped forth, and the assault resumed.

Finally, the portal crackled and changed, exploding into a hundred thousand shards that scattered high above Avechna’s Peak. The adventurers looked up, peering through their sociopathic madness in a futile attempt to judge what was real and what was not – and watched as the Astral dust tumbled down upon them.

The viscanti laughed triumphantly as the dust alighted upon the caves of the Nine Seals, turning their weakened state into full cracks, every single one on the verge of shattering within moments. In the days to come, the adventurers would wonder whether it was their fault. Had they done this? But no; the portal would surely have cracked the Seals without their intervention. There was nothing they could have done. They had been played.

And into the fear and worry came the brilliance of Estarra, the Eternal. As She had done eleven times before, She called for a Trial of Ascension, the challenge to strengthen the Nine Veils and prevent the coming of the Almighty.

← Watchers Wake to Fight the FearsThe Final Revelation: Son of Steel and Gold →