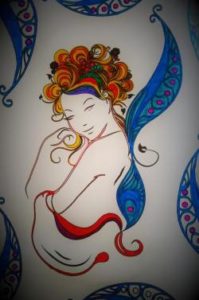 It was Avechary, 477 years after the Coming of Estarra, and the word in the Serenwilde was sparrows: Sparrows on the ground and sparrows in the trees and sparrows up in the sky. They sang a song that rang in the hearts of Serens who were present in the forest. Along with the sparrow song, there rose the lovely voice of a fae, and the songs’ harmonies led Serens to begin to search for their source.

Kerith Sweetpaw was the first to come upon Little Lleucu, a will-o-wisp fae, in the ruins of the former Spiritsinger Guildhall. The fae was singing to a sparrow, who was startled by Kerith and took flight the moment the woman came close. Little Lleucu had been chased away from Serenwilde years ago, when Delosidir the Black-Striped had laid waste to the old guilds and to large swaths of the forest. No one knew what happened to her until now. Lleucu explained how she was drawn back to the forest by the lovely song of the gathered sparrows, and she resolved to make a nest for the birds, providing Kerith with a means to empower the sparrows and bring them to the nest. A day or two were spent on seeking the sparrows on the ground, in the trees, and in the skies. In the gathering efforts, Kerith Sweetpaw and Sondayga Zayah were chief, aided by Elissata, Avalni D’Varden, Tristanna Myeras, and Eleniel and Torgaddon Silvermoon. Once all the sparrows had been gathered in the nest, they flew up with a warbling melody, revealing the Voice of of the Goddess Trialante, who sang a song of sorrow and of longing.

Trialante’s Voice, having long dwelt among the Spiritsingers, had also been driven away some years ago by the same spirit of Delosidir. Serens then recalled that She had broken up into thousands of sparrows at that time. Now, it seems that She has returned again by way of sparrows. Through speech and song, the Voice of Trialante told the amazed Serens that She missed Her sister, the Goddess Rhesileni, and that She sought some sign of Her or perhaps Her splintered shards, the sileni. So it is that Seneschal Sondayga Zayah and the aforementioned Serens, with the addition of Saran Strongleaf, led the Voice of Trialante on a search for a sileni, even though by all historical accounts they were extinct; for coincidentally, a disturbance to the mysterious Wheel of the Goloths had just recently brought many sileni to the present from times long past.

Upon the Alabaster Road through the forest, they met Cleise the Songstress, a sileni keeper of the Mysteries of the Endless Song. The Voice of Trialante was overjoyed to encounter even a spark of Her sister’s essence, even if from the past, and Cleise was in her own right honoured to meet the Voice who had led her people away time and again from the Soulless Zenos, whom she called the Dark Wind. Once more the Voice of Trialante rose in plaintive song, causing the leaves upon the trees to unfurl and even the wind itself to pause. Moved to tears, Cleise the Songstress reached out to embrace the Voice of Trialante, and with permission, the Voice imbued Herself into Cleise. Amid mingling harmonies, the two became one: Trialante, the Untamed Muse, whose body was of the sileni Songstress and whose voice sang golden with the Song of Creation.

In joy and astonishment, the Serens led Trialante back to the Serenwilde, and many hoped that perhaps She might stay with them once more after the years of absence. To help Her acclimatise again to the forest, a group of Serens, including Sarrasri Talnara, Laysus L’Eternae, Kalas Aesyra, Lehki Talnara, Arien Myeras, Tristanna Myeras, and Saran Strongleaf, gave Her tours throughout the Serenwilde. But in the end, Cleise, and thus Trialante, still dwelt in a body out of time, belonging to a past that had already been. And so, when the rifts created by the Wheel of the Goloths began to close in Klangiary, the Untamed Muse was drawn in along with the other sileni and the nagasith. Her golden song echoed across the Basin of Life, rising in glory until it was cut off for good. Thus it was that the Voice of Trialante left the present and flew to the past on the wings of time; and only time will tell if Her Voice will ever be heard again.