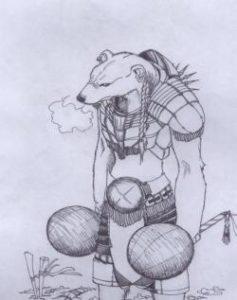 I, Lebo Needles, have requested and been sanctioned to allow this report for the Order of Shallach to be seen by all. It is rather rudimentary; I am still getting used to writing reports, but I hope it suffices and informs anyone who could not be present in Lirangsha.

As per our revived Codes, I, and my stead Snickerdoodle, made way to Lirangsha for the quarterly observation of the Heart of Shallah there. I met with the members of the Hundred, who received me warmly. We broke bread and beer from their reserves. It was rather plain, but filling nonetheless. A singer and I were in the middle of a conversation about the Order when we began to hear distant whispers. At first, she thought nothing of it; I, thanks to our training, did find it peculiar. I bid her farewell and took Snickerdoodle out into the cloudy portion of Lirangsha, assessing if any threat took there. At that time, the whispers were growing in tenor. What were once whispers soon revealed themselves to be the hissing of snakes.

As the hissing grew louder, the dusk-driven sky turned a foul green, and then, higher still, a portal flashed open. From this portal descended terrible creatures: snake-women upon wings of metal. One of them hissed to the others, a shout that made Snickerdoodle kick and buck. She said that the time had come, and that they seek power for the “Grand Design.” They were to summon the Wheel of the Goloths, which they did. However, as that happened, blue light rippled across the horizon. One of the Time Dames became aware of these gorgons’ manipulation of the Wheel. Stepasha, Dame of Destruction, made clear her intent to fight off the gorgons with an army of dominators. I tried to usher those of the Hundred I could find to safety, as soon, Lirangsha was embroiled in battle.

Thankfully, several good-hearted folks from the Basin came to aid the efforts of protecting the Wheel. Certainly, some were more interested from a observant standpoint, but many came to fight both gorgon and dominator alike. I met with Falaeron Shevat of Hallifax first, who helped slay gorgons and dominators aplenty. Ejderha Strongleaf and Iytha Trueflight found the head gorgon – Sister Nosthe, she called herself – and quickly slew her. But her death, it seemed, did not take hold. Whatever malignant power that she possessed caused her to reform anew. They fought her off repeatedly, slaying her some, her slaying some of them.

In the meantime, Veyils Ysav’rai of Glomdoring spoke to me and attempted to suss out what I knew about what was going on. She seemed sceptical about why I was at Lirangsha, but who could blame her? Our Order had not formally let it be known that we have revived ourselves after the temporal solidification of our former leaders. No matter. I hope my answers provided some clarity to the situation, but I am not too certain. In any case, after Veyils questioned me, more and more people from the Basin flooded to assist. Mostly they were from the cities of Hallifax and commune of Glomdoring, but some from Gaudiguch and Serenwilde arrived. They fault valiantly as I gathered the corpses of the fallen. When the battled lulled, we had a moment to catch our breath – but it was not for long. Stepasha and Nosthe gathered their forces once more, hundreds of dominators and gorgons. But in the end, we prevailed.

With their forces weakened, the Dame and the Sister fled and I went to assess the Wheel of the Goloths that spun in the air. Thank goodness I trained Snickerdoodle with some flight and fed him properly, aye? The Wheel seemed relatively undamaged, but it was askew. I am not sure if it was from the fight or if the Dame or Sister took something from it. But it was spinning. Fast. Snickerdoodle and I raced away as it spun in fury, its energies culminating in a fiery flash of temporal power. It streaked across the heavens, boring holes through reality. Aye, time rifts – at least two from when I scouted – have amassed in the Southern Mountains and in the Hifarae Hills, and from them, sileni and nagasith from yesteryear have arrived.

I have surmised that perhaps if enough of them are convinced to return to the rifts, that their kindred energies will send them back from whence they came, and eventually, the rifts will seal. However, I am not too keen on temporal mechanics. Perhaps a Hallifaxian can measure them or something? In any case, the sileni and nagasith seem well-intentioned.