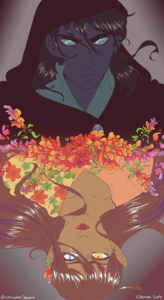 On the eve of the New Moon, the still-cursed Elder God, Nocht, approached the Glomdoring commune with a task. A young Augur had brought to His attention the existence of a beautiful peacock named Shashi that resided in the realm of His nemesis, Maylea. Where they had seen a potential hostage as a bargaining chip, Nocht saw a key to both His cure and His revenge.

He granted them an athame inscribed with strange runes and sigils and asked that they destroy the creature. The assault was swift and overwhelming – the Silent-Blessed dagger, wielded by Rancoura, sliced through the blessings and protections Maylea had placed upon Shashi and ended his life before the Mayleans could even react.

The sky was painted the colour of nightshades as Maylea raged at the assault. A number of attackers died by Her own hand when they attempted a second assault upon Her realm, but even the Elder Goddess could not undo the damage already done. But while Shashi may have been lost, his unborn eggs survived. With Maylea’s blessing now upon them, the eggs were handed over to be loved and cared for in their father’s place by Her order.

For now both Elders have fallen back to further enact Their plans away from mortal eyes. What plans does the Bloom of Serenity have for what she stole? What schemes does the Silent plan with the stolen blood and feathers of the fallen Shashi? Perhaps only time will reveal the plots of the Elders, but for now, it is clear that neither considers the slights of the other to be repaid in full.