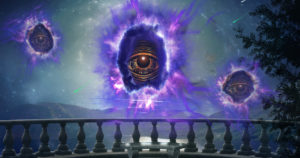 In the middle of the 530th year after the Coming of Estarra, the people of the Basin of Life began to experience strange visions. Some came in dreams, whilst others would strike at random – bringing images from a titanic figure tearing away monstrous wings to the world transformed into immaculate and desolate forms.

This quickly caught the notice of the world’s adventurers, but it was quite by accident that the first prophecy regarding the weaknesses in the timestream was found. Indeed, Gurashi An’Ryshe was overwhelmed to discover that his summoning of Mother Night had elicited more than an urge to slay the Aspects of Hart. As the Glomdoring set to considering this wisdom, other organisations launched their own investigations.

In Serenwilde, a valiant effort to summon Chuchip was ironically foiled by the progression of time, whilst Lisuarte sought to investigate the Lirangsha Retreat – having witnessed a vision referencing the Golothian Empire. Not long after, in New Celest, Qoivhae Vivalde sought the wisdom of the Supernal Elohora, and lent aid to Torili of the Ecclesiarchy.

The greatest discussion of what could be behind the events was held in Gaudiguch, where following Coraline Myeras’s discovery of Guardian Drachou’s prophecy, Jolanthe Rithel and Gabe of the Revelry shared their thoughts and visions. Indeed, many of their predictions regarding the Last Goloth’s intentions – including his desire to invade once more – proved to be correct. Hallifax also consulted their temporal scholars, and monitored the situation at length with the help of Fraesic Sunfar.

Whilst this was happening, the everyday cloak-and-dagger of Magnagora was intensified by the machinations of the Demon Lords of Nil, who never fail to advance their diabolical plots when an opportunity presents itself. Though concerned for what the peculiar visions and dreams spelled for the First World, few listened to Jaydice of the Infernals who called for unison and sharing of information where everyone else pursued their own shadowy schemes. Ultimately, all Magnagorans came to pursue the insights of the Necromentate, but each for their own ends.

Then, two months into the effects upon the timestream, things worsened. The face of Goloth Maxyenka appeared before the Basin of Life, crowing that the Beast of Time would be his to claim. There was little time to contemplate who or what this might be, for soon people were being flung to distant reaches of the First World, assaulted by one-eyed dominators, and witnessing worldwide phenomena as two timelines attempted to converge on the world’s own.

Something had to be done.

And so it was that throughout the Basin, the guilds that had come to serve their cities and communes sought to defend their charges. In an unexpected delay of sobriety, it was the Revelry of Gaudiguch who were first to secure a project to defend their citizens – though the Skylark Consortium of Hallifax were not far behind. As their members quickly discovered themselves immune to the temporal manipulations, other guilds followed – with the Infernals of Magnagora, the Thornwatch of Glomdoring, the Ecclesiarchy of New Celest and the Sowers of Serenwilde soon following.

These projects were acquired in ways as different as the organisations themselves.

In Gaudiguch, the Revelry – led by Kistan Rithel and Gabe – unlocked the way into a new section of their guildhall, unveiling a mysterious artifact known as the Multidexicolorma, whilst the Goon Squad reignited the Infinity Inferno and the Seekers conducted a transmological ritual to create the Eye of the Gnostic Dawn.

Opposite them in Hallifax, a group of concerned citizens sought the wisdom of the city’s most knowledgeable temporal minds. With the data they had gathered, they assisted Indcii Oolin in discovering several temporal nexii – divergences in the timeline where the survival of Hallifax became drastically more likely. With this knowledge, the Skylark Consortium were able to converge the Taroch Project, the Grand Aerie assisted Isaisys the swan in singing the Echoes of the First Symphony into being, and Princess Setisoki of the Adherents called forth the Font of Time.

In Magnagora, months of gruelling pursuits first yielded results for the Infernal Mandate. On the Supreme Master Luciphage’s orders, the Mandate sought to summon an artifact powerful enough to ward off temporal interference and, with the help of the ancient archlich, Veritus n’Rotri, they marshalled the magicks of the Black Fortress to their ends. Meanwhile, the Heralds of Dark Fates were playing the long game at Prince Baalphegar’s behest. Deals had been struck, skilled ritualists dug out of holes, astrologers consulted, and demonologists enlisted; and then two bucketfuls of Earthen mud later, the timeline convergence has been exploited to great result. None of this, however, concerned the Iniquitous Society who were dealing with a handful of a project of their own. Little is known of what actually occurred except that it involved a fair amount of tea and blood.

Deep within the shadows of Glomdoring, Proselyte Afollia and Proselyte Esri, along with Lothwen Darkeye, discovered an antique mirror behind some drapes in the storerooms of the Temple of Mother Night. Discerning mystic energies thrumming beneath its reflective surface, they were able to awaken its power, which revealed the location of the Scrying Pool of Hallowed Blessings hidden within an ancient vault, able to control temporal abnormalities. Meanwhile, Rotbark the Blackhearted Wyrdenwood awoke within the Thornwatch Maze, disturbed by the quakes in time. Kyalrhin of Thornwatch who Rotbark saw as an “odd little bug” was ultimately able to convince Rotbark to help, which he did in the form of a giant shadowcatcher web. Soon joined by Spirit Warden Xenthos, they were able to empower the web, they transformed it into the Garden of Merciless Reaping, whose roots were able to extend into time itself. Most strange of all, however, was when the swarm of locusts known as Raemourne the Multitide who called forth an enormous horntail wasp for Vespula Azele Stormcrow. Demanding that the wasp be fed, Azele, with the help of Xenthos and Steingrim, was able to provide it with enough essence for it to explode into the Horde of Wyrden Glory, a clutch of enormous insect eggs, pulsating with temporal energy.

In Celest, Torili and the Praetorian Hamos sought the aide of Celest citizens to complete the ritual to discover the hiding place of the Tears of Saint Tresalyne, which were brought back to the Ecclesiarchy and incorporated within the lighthouse, lending their light to its beam. The citizens rejoiced and soon sought out Yanitone Symfale of the Archons who revealed that through his merchant network he had obtained a rumoured Relic of the Dawn’s Promise. Once the reliquary was blessed, the Shards of Morning’s Absolution began to protect those who had so empowered them. Meanwhile, Zeasha Novikei had been searching for answers to what was causing rumbling below the garden at the heart of the Sanctifiers guildhall. With the aide of the citizenry, the chamber of tides, containing the mysterious basin known as the Thalassos, was unearthed.

Sparrow led the Sowers (accompanied by a cow) in a ritual dance, which brought forth a mysterious seed. When planted, the seed grew into the Amberleaf. Lalenna, meanwhile, had been seeking answers of her own. Waking from a trance she found that she had created, or been gifted, a ritual totemcarving knife. With the aide of the Wodewoses, the knife was empowered and the Totem of the Tribes revealed. Lastly, the Listeners uncovered an ancient veneration chamber when, at the behest of the spirit Teharo and the aid of Miakoda, a number of members of the other guilds came in to help make the necessary offerings.

In time, all eighteen guilds of the Basin of Life were empowered to protect the timestream – a fact which greatly angered the Last Goloth, Maxyenka. As the new year turned in Lusternia, he lost control of the Beast of Time, whose unleashed power tore great wounds into the timestream.

Every now and then another of these scars opens, causing a Timequake that opens a rift into another part of time – occasionally, even another timeline entirely. Lusternia will not be the same again, but as is often the case with such events, many questions remain. Who or what is the Beast of Time? What caused the perfection of the Immaculate Age, or the apocalypse of the Age of Desolation?

Time, quite literally, would have to tell.