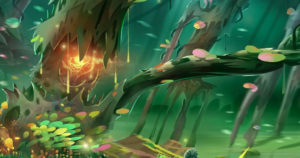 Strange weather. The people of the Basin of Life had thought that the rain of bouncing balls from the lightning-splashed sky was the end of it.

But in Shanthin, 505 years after the Coming of Estarra, reality shook once more, and the very ground began to sprout with tangles of blue-green shimmering thread, which spread like wildfire through the cities and communes of the Basin and the wilds between.

Nobody knew what they were or where they came from originally, and theories abounded. The threads grew from depressions in the ground centred on round, glowing cores. Sinkers, some called them, and the sinkers grew relentlessly, sending their tendrils far and wide, indestructible except at their tips. And even those who managed to take down a sinker found an unpleasant surprise: a volatile explosion that took many lives. Only those who called up lowmagic and highmagic shields, or whose vitality could bear such fire, survived.

The peoples of Lusternia worked to clear the sinkers and threads from their cities and communes, convinced that some harm might come from them. But the work was long, arduous, and the threads continued to grow, the sinkers tangling together and pulling at one another in dream-like, shimmering masses. The stargazers looked to the heavens for signs, and all they saw was Aapek rising and rising, against a backdrop of strange stars.

And yet, the Fates did seem to smile upon the Basin’s efforts. About a year into the invasion of the blue-green threads, the tendrils began to fall away slightly, succumbing to a common soil fungus that spotted the tendrils and rotted the sinkers. The nigh invincible threads didn’t look so invincible after all. And amid the strands, a golden-eyed bard walked blithely, touching, examining, listening to the strangely-coloured growths with deep curiosity and a strangely kind regard….

Klangiary, 507 years after the Coming of Estarra: The Basin of Life saw a wondrous sight. Hundreds of blue-green balloon-like floaters finally matured and rose from the sinkers and threads upon the ground, crowding into the lightning-split skies. Father Sun was entirely obscured by the clumps of rounded floaters, throwing the temperatures across Lusternia into a frigid chill.

Sadie and Xeii, who had been examining the threads at the time of the floater maturation, witnessed their flight into the skies and heard the surprised cry to Sepehr Skytamer, balloonist, who could not help exclaim in response to the appearance of so many balloons not his own. Sadie and Astrasia, followed soon by Ayisdra, Romaan, Qoivhae, Lyora, Yendor, and Deichtine, made their way to the tiny island upon the Inner Sea where Sepehr dwelt to discuss this new, strange turn of events.

Sepehr, while initially considering the utility of roping a group of the floaters together for air travel, soon realised that the floaters also blocked out the Sun and made the Basin of Life unbearably cold, even in the maritime climes of the Inner Sea. Sadie, Astrasia and Xeii were among the first to discover that the floaters could be popped with a judicious poke, and they set about poking and popping the strange blue fruits of the ground-based sinkers and threads. Before long, another discovery was made: the bouncing balls have returned, almost in lockstep with the rising of the balloon-like floaters. And astrologers across the Basin turned their gaze to the stars once more, noting with alarm the numbers of floaters in the skies.

Heartened by the weakness of the threads and chastened by the surgence of the floaters, the peoples of the Basin made further pushes to eliminate the sinkers and floaters alike, and slowly, their efforts are making a difference.

What will the Basin of Life think now of this strange turn of events? What wild theories will the learned concoct, and to what end? What will be done with this ever-rising collection of balls, sinkers, threads, and floaters that explode with heat and yet cool the world through their exuberant fruitfulness?

And the strange weather. It’s snowing in Mount Zoaka and freezing in the Skarch. That can’t be good.