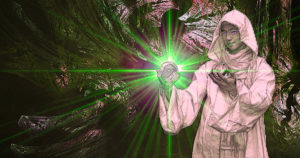 While sinkers and threads plagued the Basin of Life, transmologists were plagued by a vision of the threads unearthing something looking like a box or a chest. Soon, the visions came true, and a chest was found off of a spectre-filled island. Mosachi Xeeth of Gaudiguch claimed to potentially have some knowledge as to the chest, providing a key with which to unlock it. Within, a curious looking document was discovered, although Mosachi believed there was more than met the eye.

With Alaksanteri’s aide, Mosachi had an equally curious flower planted within the City of Freedom. Believing that the document had some secret which would be revealed by the chemicals within the flower, the document was fed to the flower. A month or two passed, with the plant getting an increasingly worsening case of indigestion. For days it gurgled and belched, ultimately ejecting the document so violently it flew high above the City, falling to an unknown location. So curious was this that Xenthos of Glomdoring came to investigate to offer his aide, but it was ultimately Tifja who came forward with the map of Rikenfriez, which parties unknown had turned in.

When nothing of note turned up in the village, Xenthos, Dys, and Jolanthe returned to Mosachi, handing over the map for further inspection. For a few days Mosachi poured over the seemingly innocent map, before finally gleaning some information which ended up being of use. Following the trail, a cache of transmological documents was discovered, providing further insight into the intentions and history of the laboratory of Mosachi’s ancestors.

What further information could be gleaned from these documents? And what about the pitcher-plant flower still growing in the lava gardens of the City of Freedom?