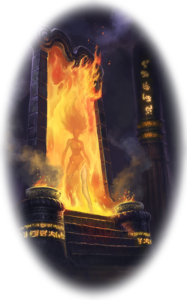 Verses of Magnora, MXXXIV: “Within the serpent’s habitat shall mortals step before he dies” And so they did; but not without a Trial. When Avechna called the Final Ascension Challenge forth, the High Prophet Ghani n’Rotri swooped in and stole the Staff of Ascension for himself, and began to ascend as an Avatar of Kethuru. This had been Ghani n’Rotri’s plan all along – his destiny as was writ in the Verses of Magnora – as his repeated efforts to gather power and spread chaos throughout the First World during the last several years were to build an Orrery upon the silent astrosphere of Ophiuchius. Now, armed with the Staff of Ascension, Ghani challenged the Gods themselves. When Estarra, Avechna and the Elder Gods opposed him, he was able to channel the powers of Kethuru causing reality to tremble and, rather than risk shattering reality, Estarra pled for the Sealbearers to defeat Ghani and reclaim the Staff of Ascension and recharge the Nine Seals holding the Soulless Gods. Tracking Ghani through the Ophiuchius and using the Ophiuchian Orrery, the Sealbearers began their hunt which led them to a higher astral plane, a realm known as Pandaemonium. Horrible creatures filled the realm and attacked any who entered. But with perseverance, the Sealbearers were able to make their way in and track Ghani as he continued to channel the powers of Ascension. Sealbearers Taevyn of Justice, Ixion of Death and Veyils of Life were neck and neck in their battles with Ghani. Then out of nowhere, Sealbearer Malarious of Harmony did battle heavily against the Avatar of Kethuru, almost coming to the lead. But in the end, Sealbearer Veyils of Life did enough damage to Ghani to claim the Staff of Ascension. And so Veyils wielded the Staff of Ascension and recharged the Nine Seals, rising to become True Ascendant Deichtine of Life.
← January 2018 NewsletterApril 2018 Newsletter →