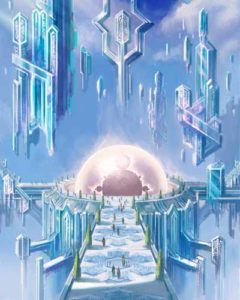 It fills me with joy to write you once again and communicate the duties of my life since last we met. As ever, I am a servant of the Queen of Queens and carry my discretion with dignity, but though it is a fell day that brought me back to you, I am nevertheless pleased.

I had not known what to expect when the Hive ordered me away, but I have found Hallifax, the Beacon of Harmony to be a suitable home. Much of their lives are ordered not unlike a Hive. In Hallifax, our Queen of Queens is a male known as Chairman Falaeron Shevat. I aspire to no ideas of grandeur despite their influence, do not worry.

When the Princess Setisoki first arrived, I wondered, ‘Is it today?’ So much turmoil in the world, surely it must be then. I was wrong.

The headaches have not stopped mother, but I strive, as dutiful as I may with dignity and a role model for my fellows here. I know now, what happens in other areas of the world is nothing compared to something so direct and intimate that it would assault my very mind no matter the distance and our Divine Queen of Queens. Marquis Doman Trueflight escorted me when the Princess returned, I had hoped yet dreaded it fearfully.

In front of such esteemed individuals as Marquis Ejderha Zayah, Marquis Yarith Shevat, Marquis Ushaara, Marquis Ayisdra Ysav’rai, Marquis Doman Trueflight, Marquessa Orvent Trueflight and Queen Anita Zayah, it was only my training under your tender care that allowed me to maintain strength and composure when the words were said. I could not have denied them, even if I tried. Though it was a burden of secrecy I gladly held, I felt the weight crash upon my shoulders that day, knowing that something threatened every Hive in existence for the words to be spoken.

Dread for what could threaten us and joy at being allowed back to you, all mingled with the pride in my new Hive, these Hallifaxians, so orderly and dignified. I have seen them as babes and triumphant heroes, all with the necessary poise you would expect of any student, mother.

I do apologise for our cacophonous and undignified arrival all the same, but none can disobey a direct order from the Queen of Queens. I hope we did not disturb your training overly much and eagerly await correspondence.

Your dutiful student and son,
Horotep

I have ever vowed to finish your training, and I am pleased the time came where I might though I know it brought ill with it.

I have my son back.

Maintain correspondence, Ambassador, for I shall relish each word writ for my eyes. Though it always felt too soon with much left unfinished, it has ever brought me pride to speak and think of you, Ambassador Horotep.

Your arrival was perhaps an unexpected and undignified surprise, but no less welcoming as it brought my son home finally. It does appear your work was fruitful for every Hallifaxian in attendance gave the oaths we were told to recite and expect. The holy text is no longer my sole burden to carry, these members of your Beacon of Harmony are now the proud caretakers and teachers. Even their Queen of Queens, though Chairman is an odd title, agreed to the terms as written within the pages of Zarakido itself.

Our long service in studying and guarding the script is done. I seek not a Hive of my own, but will continue training new masters as it is the only life I know, and perhaps one day it will be enough.

I admit great surprise at having the Princess herself for a student, as well. How is she, my son? It is a blessing to think another shall join you in keeping these new students true to their vows.

My one regret was not having enough blessed tessens for all, I wonder if they require our skill in this as well?

Your mother who is glad she was not forgotten,

It is good of you to think of the new students’ needs, but truly, Overseer Portius Nitraedes, was quite efficient in arming our new Tessenchi.

The Princess keeps her own counsel more often than not, but she presides and guides the most lawful and orderly of our number, the Adherents of Adom. Law and justice at their sides, they are a remarkable guild for upholding the words set out by the Manifesto and Cririk Adom.

I do have news, though perhaps you know already, Queen Tutotophet has been recovered. The stories are horrific. She was found with missing limbs! Whatever could someone do with our limbs? I shudder to think.

Oh, my, speaking of students, I have my own new one to attend. The Collegium is a hive of excitement with those enrolling.

Grateful as always, your son,
Horotep

← Founding of the NunchakuNovember 2017 Newsletter →