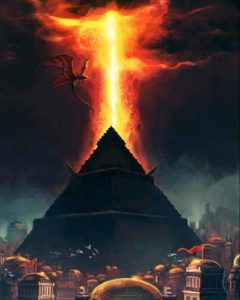 It all started with when two rivals had a spat. Madam Yith, the recently ousted Illithoid Ambassador to Magnagora wandered into Gaudiguch seeking out Ambassador Ilogbog. Madam Yith eventually left, but not before lighting an ember, an ember that later emblazoned into an inferno.

This ember sat with Ilogbog for a month or so when she picked up on psionic activity within the Skarch. She knew that both her time and Gaudiguch’s had come. Quickly, she amassed the City of Freedom and followed Dys Mzithrei, the Sacred Enigma into the desert. There they found a patrol of illithoid tracking following leads and tracking kephera. These illithoid were out seeking information leading to the recovery of their kidnapped Overseer, who had been taken the previous month. Their leader, Cenobite Llegghal, was none too pleased to see the Ambassador and the citizens of Gaudiguch come upon them. A conversation took place outside the hearing of those without psionic abilities, leading to Llegghal’s growing disappointment. Right as things were about to boil over, some scouts came back with a kepheran scout. After interrogating the scout quite thoroughly, they learned that the kephera were not responsible for the kidnapping and had indeed, had one of their Queen’s kidnapped from under their noses.

As they dispatched the scout, they were set upon by a giant flesh monstrosity. Nothing seemed to damage it, as both the illithoid and citizens threw everything they had at it. All hope seemed lost until out of nowhere, drawn in by the commotion of the fight, none other than Akungi Saim, the old Pyromancer tutor wandered in. Turns out he was hanging out in the desert, smoking some of that good ol’ weed and heard a big fight that was ruining his chill. Seeking to put an end to it, he came upon the weary and reluctant partners flailing helplessly at the strange beast. Quite upset at all the hubbub, he took one second to focus inward and sent out a burst of..something that seemed to weaken the monstrosity. Now the rest of the ragged crews were able to break through the flesh and destroy this monster.