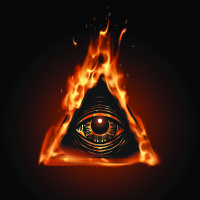 The crash of the Lyraa Ey Rielys aetherbubble into Lusternia and its subsequent ripping away by Queenie of the Gnafia caused the fabric of reality to fray once more. Again the Nine Seals that held back the Soulless Kethuru were weakened. Thus the Trials to reinforce the Seals begin once more.

The first Seal was of Chaos. Adventurers across Lusternia rose up to seek and catch the Purple Hamster of Chaos, who imbued all those who held her with growing madness. Tarken of Glomdoring was the first to find her, but despite holding her for nearly half a Lusternian day, the Chaos Hamster had other plans. She was subsequently caught by Ixion of Magnagora, then Unitos of New Celest, then Steingrim of Gaudiguch.

But it was near the end of the Trial that Chaos finally reared her full powers. The Hamster went to Avurekhos of Magnagora, followed in the last moments by Enadonella of Glomdoring, then finally, in the remaining, chaotic few seconds, she chose Kreon of New Celest as Champion out of pure chance.

Congratulations, Kreon, holder of the Seal of Chaos!