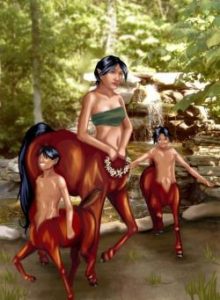 In the wake of the marriage between the centaur elder Tokota and his beloved Adushoc, the Serenwilde found themselves embroiled in a mystery. Shadows grew, whispers murmured, and strange visions danced at the corners of one’s eyes. At first, this occurrence was time: a minor ill omen that seemed to some like the awakening of an ancestor or other unknown spirit. However, as the autumn days grew longer and colder, these signs turned exceedingly worse.

Indeed, several days past before a shriek cut through the communetop shops, forcing Aeldra Ladyn, Selenity Sweetpaw, and Anita and Ejderha Strongleaf to race to the scene. There, they found a disturbing sight: a brutally murdered faeling, her wings pinned down. Elenra, as she was recalled, was a frequent visitor to the Gargling Pixie. The fear of those assembled was that her death was the beginning of a dark plot, which lead to High Priestess Aramel Shevat to seek out the advice of Moon Priestess Ridien as the others interned the corpse to the embrace of the earth.

Ridien, at this time, had been studying texts herself, for she too felt this coming presence. And as those who mourned the faeling moved to Moondance Tower, the conversation turned to spirits, blood magic and a threat against the forest. The Moon Priestess suggested waking the mighty ancestor, Chuchip, and the forest did, hearing a cryptic prophesy that lent many scouring to discern its meaning:

“Blackness tinged with blood and flame draws over the Seryn for his game. Young and old fall to his will as the wind falls silent and deadly still. Madness shall reign in acts of five, and blood shall spill from the white-bone knife. Rejoice and dance, you people free, for the trees shall grow in groves of three.”

From many did Serenwilde seek to illumine the meaning of this verse: from the Maiden of the Moonhart to Eurytus and Cataka, to finally White Hart Himself. The Stag Spirit sensed something familiar with this presence and urged the forest to try to peer through the veil into the realm of spirits. The Shelterfolk travelled to the ancient grove of the Hartstone, and there, in the light of the full moon, they danced around a sacred fire. Ethereal creatures poured in to join, as the beat of a drum echoed throughout the forest. There, a vicious tear gave sight of a bare-chested man, black gashes upon his chest like a while animal. Returning to White Hart, the Spirit gave a name, and an ancient enemy was remembered once more: Delosidir, the Black-Striped.

Unknown to most, the story of Delosidir was, in fact, the same story known to the Serenguard as the story of the Foolish Warrior: he who shunned the ritual and traditions of his people, who attempted to best the Spirits and failed. It was Cataka who explained that Delosidir came from the ancient tribe of Serens known as the Wodewoses, and as such, he was far older than anyone knew.

The arrival of the Black-Striped heralded more slaughter, as he picked off faeling, elfen and cooks alike. But it was in late Juliary did his twisted plans truly begin. Fire and shadows overtook the canopies, and as the Serenwilde fought to bring both the heel, it was soon discovered that they originated from the Lodge of the Serenguard. Bursting through the doors, they found Kota Truehoof – the newest Brave – in combat with Master Eurytus. They fought and the younger thrust his weapon through the chest of the elder, darkness around him and in his eyes. As Eurytus lay dying, Kota rushed away and used the blood of the tutor to break the Magnolia Lock and free the dreaded Mistdancer, Fiabelhie Stillriver.

A terrible alliance, Delosidir and Fiabelhie spent month after month bringing devastation to the Serenwilde. The Warrior set the treehouse of the Spiritsingers aflame and forced the Voice of Trialante to depart by the screams of a banshee; the Mistdancer and her naiads drowned the sacred halls of the Shofangi. Master Osierti sought to fight back the fell spirit, but his blows failed to find purchase, he falling victim to her noxious touch. Not long after, Delosidir continued his plan, using dark blood magics to snuff the Flame of Glinshari as Fiabelhie’s naiads raided Moondance Tower. In a final ploy to stop them both, Moon Priestess Ridien forced the Tower to collapse. However, this strike did little to set them back as Delosidir caused the Flame to go out.

Without the blue fire to protect the Serenwilde or Hart, the Black-Striped struck against White Hart, tearing an antler from his head to harm the pale Moon Spirit. Bloodied and weakened, Moon fluctuated between two states: a raging Full Moon known as the Sanguine Moon and the weakened, hidden New Moon known as the Darkened Moon. As Serenwilde buried their fallen, any inkling of hope appeared lost for so too did the Moonhart Mother Tree die without its spirits.

But all was not lost.

The Serenwilde sought answers from their ancestral spirits, but instead, they met a green-skinned elfen man. Gifting them with a curious dowsing rod, Serenwilde was led on a chase through the forest, using the magical trinket to break a concealment spell that revealed a pocket to the Ethereal Plane. There, they found Sparrow Longfellow, an unusual and new fae, who guarded the Last Seed – a prophesy and dream shared between Ellindel Treeheart and Glinshari Strongleaf. This seed, this hope gave Serenwilde a plan, for before they had already begun to stand against the threat of Delosidir and Fiabelhie.

This plan of the Serenwilde, heralded by the Last Seed, led them to the Snow Valley to ask for the assistance of the daughter of Chief Orovosh. This woman, Lalenna Hhuhur, it would be discovered soon after, was actually the reincarnation of the very first Wodewose Awedhel, and Spirit Warrior of Serenguard legend, who would do battle with Delosidir. Aided by Dain, Nature Guide, Serenwilde requested her to relive her old memories, and she agreed, falling into a coma for a month’s time. As glah’rai naiads and shadows loomed, Serenwilde fought, waited and protected Lalenna, hoping she would recall a way out of their current situation.

Lalenna did. Or rather, Awedhel did. And when the igasho woke, she led the Serenwilde in a ritual to heal the ailing Moon. No longer forced beneath the reddened light of the Sanguine Moon, or the shadowed face of the Darkened, Moon was silver hale again. United with Moon again, the Moonhart Mother Tree returned to life, allowing the Serenwilde to revive White Hart and begin preparations to reignite the Flame of Glinshari. As this process began, Dain asked the Serenwilde for a way to get rid of Fiabelhie once and for all, and so began a long conversation – a debate really – about sacrifice, the Dreaming and victory. In the end, Fiabelhie was banished, but Dain too was lost.

Victory was imminent and Serenwilde rallied their spirits – both Great and ancestral – against the Black-Striped Warrior. As Seren after Seren slew the shadowy manifestations, they struck at Delosidir and brought him beneath their blades. The spirits of the forest struck too, tearing the dark spirit and cursing him into proper oblivion. Finally, the Serenwilde would know peace!

But peace in ruin. As every good Seren knows, the cycle continues. Where there is loss, there will be recovery. In death, there is life. In those dark months, Serenwilde lost many friends and allies, but also they lost their most sacred institutions: the great Coven and Circle were no more, the Serenguard and Spiritsingers were burnt to ash, and the Shofangi drowned beneath the Moon Lake. But once more came that green-skinned man. Speaking of unity, hope and the reminder that Serenwilde persists eternal, he revealed himself to be the still-living Glinshari Strongleaf. Beneath new banners will the Serenwilde continue on and it was so.

No longer is Serenwilde home to the Moondancers, Hartstone, Serenguard, Spiritsinger, or Shofangi guilds. But instead find new communities: the Sowers of the Last Seed, the Listeners at the Veil, and the Allied Tribes of the Wodewoses!