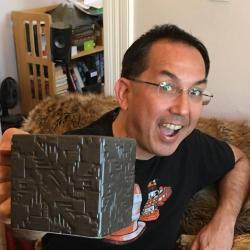 What would Queen Maeve say about 2016? Perhaps she would remark how fantastic it was that she entered the year with the removal of the Brand of Nifilhema that she bore for so long. Or perhaps she would despair over the loss of her beloved consort. If this was how the year began for the Queen of the Fae, it only got more … shall we say interesting? Unseasonably hot weather gave way to sun flares and the visits from druids and wiccans from the far off jungles of Jojoba. Somewhere in the upheavals, Maeve became possessed by a fiery presence. Finally, after untold invasions by the fae of Father Sun, the path led to the Tree of Trees and Amberni which culminated in the revelations of the Black Sun and the weakening of the Nine Seals.

Along the way, we heard of the lost song of Sirenalai, met a skunk in Faethorn, wrangled a few baby animals, uncovered a mystery at Highwater Keep, helped the children of the Blasted Land, helped a harlot get her revenge, investigated disturbances at the i’Xiia Asylum, helped a professor experiment on Alligators, and much more. And let us not forget the exploits of the Elder Gods, with Mysrai and Zvoltz releasing the Secrets of Iklara wherein the phantom Elder Goddess known as Ashtariel briefly returned, with Darvellan returning with the gentle giant known as Weiwae, with the Machine God Thax arriving with bolts of metal, and with lightweavings paving the way for Isune.

If all these events weren’t enough, we focused on many upgrades throughout the year. Admittedly, most of the updates centered around tying up loose ends in the wake of the major combat overhaul in the prior year. But warriors received much love, including a major update to armour and their damage formula, not to mention a complete revision of their skills. Dreamweaving and healing were practically rewritten. Regeneration also received a major update. Probably the biggest change was to the races, removing racial stats in favor of perks and variants. Somewhere in there, we did the Anomaly Shuffle, with Ieptix moving on to better things and Iosai returning to much fanfare. We looked at reigning in gold and commodity bloat with the transfer of aethergoop to a permanent promotional feature. Finally, we managed to rethink the newbie tour, completely revising it so newbies enter the game proper much faster than before.

Two things that I thought we would get done were pushed to the back burner in favor of catching up on an unexpected backlog of envoy reports (please thank Iosai for resolving this issue!). Yes, I’m talking about factions and monks. My promise to you going into 2017 is that these two projects will receive top priority. Guilds will be removed in favor of factions. And monks will be revised in a similar manner as the warriors, and we’re also looking at an Alchemy update. Better still, plans are in the work for new tertiary skillset choices for several of the archetypes!

There’s a couple of other big projects that need to be done. One is that we are working on a brand new website to bring us into modern times! I’m very excited about that but it is a LOT of work. Also, we want to update our artifact system into a database–something we’ve been dragging our feet on but we really want to do. This is a massive behind-the-scenes project that you likely won’t notice or even affect you much, but will make admin life much better.

Okay, this next thing I’ve been dragging my feet from mentioning, because what we have planned already will take up a lot of our resources and I am uncertain how far we can get into this Next Big Thing. Hmm, maybe I should sit on it and keep quiet. Oh, what the heck! We want to release the undisclosed, hidden sixth archetype! Again, I’m not sure we’ll be able to make the release in 2017 but feel it is time to turn our attention to the archetype that I’ve been sitting on for 12 years. Yes, the sixth archetype was designed before Lusternia opened–indeed, we had thought it would be part of the initial release. This archetype is such a major project that it always got pushed back in our priorities until it was practically forgotten. But no more! I won’t tell you what it is but I will say it has been majorly foreshadowed in at least one area in the Basin of Life. Let the speculation begin!

Let me conclude, as I always do, by thanking the many volunteers who make Lusternia possible. Without them, we simply would grind to a halt, so I hope players will recognize this and give the gods many accolades for the roleplaying they provide, the events they run and the many, many behind the scenes duties that are handled. We had several admin that needed to take an extended break this year, but they have returned, recharged and re-invigorated and ready to go! I’d like to personally thank Drocilla and Hoaracle who have risen to jointly be my right hand, Morgfyre and Thax and Lisaera and Nocht who are the greybeards that everyone looks up to, Darvellan who does AMAZING things behind the scenes, Manteekan who makes me laugh and has an incredible imagination, Jadice who keeps us on our toes, Weiwae who is new but has taken a lot, and Isune and Mysrai who are also fresh faces that are so very enthusiastic. And there are several very promising ephemerals behind the scenes who I expect to become full admin and who will simply rock everyone’s socks off. All the admin want just one thing–to make Lusternia a great place for players to enjoy and have fun!

And thank you, players, without whom there would simply be no Lusternia. Because most of you have been with us for so long, and have supported us through the ups and downs, I cannot begin to tell you how much it means to me that you have kept Lusternia alive for 12 years running. For those of you who are new to Lusternia, let me tell you that the players and admin are simply the best you will find, and if you stick with us, I promise you many adventures that you will remember even after the Nine Seals break and the Soulless Gods swallow our souls!

Much love,
Estarra the Eternally Grateful

← Retiring from Mysrai: Nothing but Love, Love, LoveSalvation of the Orcs →