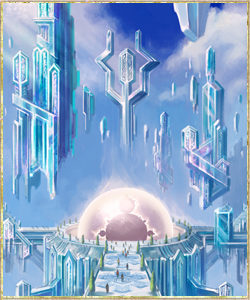 Caught in a temporal anomaly during the Taint Wars, Hallifax was lost in time and space for over five hundred years. When the lost city finally returned to the current timestream, all its citizens were dead except for one, Cririk Adom. Upon declaring its independence, Hallifax strives to be the epitome of the confluence of logic, beauty and harmony. The city itself is a marvel of aeromantic engineering and floats above the Basin of Life. The nexus of power is known as the Matrix, which spans to the Elemental Plane of Air and the Cosmic Plane of the Continuum.

Believing in a strict hierarchy, Hallifax has strict social castes. The lowest caste level is that of servant, followed by bureaucrats, then the merchant class, and then the highest caste which is reserved for artists and scientists. Though it is arguable that the ruling elite make up a higher caste, it is generally thought that they are servants to the collective. Though in the ancient days before the fall of the Holy Celestine Empire, Hallifax was run like a corporation, in recent times they have opted for a more traditional representative governmental system.

The nexus of power in Hallifax is the Matrix, located in the center of the floating city. It simultaneously exists on the elemental plane of air and the cosmic plane of the Continuum.

Established in 472 CE, the Adherents of Adom are a formal organisation devoted to following the example of Cririk Adom. Over six hundred years before the return of the City of Hallifax, Adom gave the order that would ensure the Beacon of Harmony survived the Taint Wars. Six hundred years later, he saved his city for a second time. Finding himself reborn unexpectedly with the return of Hallifax and Gaudiguch, Adom ensured that the Beacon of Harmony would prosper no matter what - even preserving his own body that his knowledge would enrich Hallifax through the ages.

Therefore, just as Adom once did, the Adherents consider it their duty to ensure the preservation and prosperity of the Beacon of Harmony for generations to come. They value structure and order, holding strongly to concepts put down in the Collectivist Manifesto: that freedom is a lie, and that only law will ensure the wellbeing of the Collective. Methodical work, extensive reasoning and a logical approach to all aspects of life are traits commonly found in Adom's followers.

Founded by the Collective under the watchful eye of its Master Artists to encourage cultivation of the Higher Emotions, the Grand Aerie for Harmonious Refinement serves to further the ideals of the Collective by exemplifying beneficence and dignity, in word and action. Originally funded through the State, with donations by the Clarramore Family in memory of Jilai Clarramore, founder of the acclaimed Hallifaxian Opera Symphony, the Aerie subsequently received artistic resources and guidance regarding culture and etiquette from Hallifax's Master Artists. The Aerie's charter includes a mandate for altruistic endeavours, through which they disseminate their beliefs and ideals throughout and beyond the Collective. Through such altruism, performed in order to enact their vision of Harmony and Beauty, its members aim to transcend the mundane and to quiet the chaos of lesser communities by elevating all to their version of perfection.

The Skylark Consortium for Collaborative Advancement is an independent research institute and think tank, composed of the greatest scientific and mercantile minds cooperating to advance the Collective's interests and influence. Founded by the corporations of Hallifax as a conglomeration of business interests, scholars and experimentalists, the Consortium seeks to expand its knowledge and mastery of natural phenomena, including temporal mechanics, with which it has historical expertise. Utilising the time-honoured methods of philosophical inquiry, scientific analysis, and commercial enterprise, they are able to both fund and pursue their discoveries and ideals.

Named in honour of the Skylark Company and its pursuit of excellence in protecting Hallifax, the members of the Consortium also continue this tradition, working to ensure the success, prosperity and longevity of the Collective. Persevering in the name of innovation, it is a home to the ambitious and resourceful who enjoy breaking down barriers to novel ideas and theories.

The Aeromancers Guild are mages who devote themselves to the element of air. Though originally founded many centuries ago, the guild was lost during the Taint Wars when the City of Hallifax was trapped in time and space for over 500 years. The Aeromancer Cririk Adom was the only survivor, and it was he who reopened the guild. Teaching the arts of wind, cloud and storm, the Aeromancers are a formidable force to be reckoned with, despite their academic and intellectual leanings.

Aeromancers are a mage archetype. Thus, they are required to take HighMagic as a common skill before being able to study the Elemental magic. Once having mastered Elemental magic, the Aeromancer then specializes in Aeromancy, allowing them to travel to the elemental plane of air. The main secondary skill of a mage is Illusions. Aeromancers also at some point decide to be a runic mage by taking the skill of Runes, or a dream mage by taking the skill of Dreamweaving, or a psionic mage by taking Psionics (with the choice of specialization between Telepathy and Telekinesis).

The Institutional Society of Hallifax for the Improvement of Temporal Knowledge (more commonly known as the Matrix Institute) is a learned society for science established during the earliest days after the founding of the city of Hallifax. Primarily responsible for the practice of Temporal Manipulation and the discovery of Continuum, the Institute used their understanding of Time to join together with the Aeromancers and create the Matrix. Since then, the Institute has elevated the study of Time into a Science itself, to which they still dedicate most of their research. Since their founding, the Institute has branched out and now seeks to improve knowledge of all natural and unnatural sciences through controlled experiments. The Institute is a society of learned gentlefolk who take great pride in their profession, as is reflected by their motto: 'Take nobody's word for it', which is an expression of the determination of the Fellows to withstand the domination of authority and to verify all statements by an appeal to facts determined by experiment.

The Institute is a guardian archetype. Thus, they are required to take HighMagic as a common skill before being able to study Cosmic magic. Once having mastered Cosmic magic, the Institute member then specializes in Harmonics, allowing them to master the crystal technology on the Plane of the Continuum. Their main secondary skill is Rituals, which when they master will allow them to specialize in Aeonics, the study of time manipulation. At some point a member must choose either to take the Healing skill to become healers or to train in Tarot which is a more aggressive art or to study the science of Astrology. Institute members may also take Enchantment as a trade skill with a specialization in Spellcraft.

In the early days of the founding of Hallifax, the Matrix was not a very well understood source of power and produced several temporal anomalies. The Holy Celestine Empire charged Hallifax with overseeing these anomalies, which sometimes released hostile entities through unstable dimensional rifts. At first, Hallifax employed mercenary companies to help investigate these anomalies, one of which was the Skylark Company of trill mercenaries. Hallifax eventually purchased exclusive rights to the employment of the Skylark Company and, together with Hallifax's temporal mechanics and engineers, founded the Sentinel Company of Temporal Anomalies (commonly called the Time Sentinels). Though eventually the Matrix stabilized, the Sentinels continued their initial mandate of monitoring the timestream, where they closely worked with the Matrix Institute. However, their duties eventually grew to encompass more traditional home guard and military assignments, especially in relation to procuring mining areas. This eventually led to the establishment of the Ministry of Peace, the bureaucratic branch which oversees the Sentinels. Today, the Sentinels operate as a highly ceremonial guard in the city of Hallifax, where their blue-white dress uniforms, silver breastplates and ornate halberds have become part of the culture of the city. The Company is a highly structured and rigid organisation, and those who seek to serve as Senior Officers generally must still have a degree in temporal mechanics.

Sentinels are a warrior archetype. Thus, they take Knighthood as their primary skill, though they may specialise upon reaching mastery as a Blademaster, Bonecrusher, Pureblade or Axelord. Like all warriors, they take Athletics as a secondary skill. They also may take Rituals as a secondary skill, and can specialize in Aeonics. Alternatively instead of Rituals, they may choose Hunting and specialize in Tracking.

The Symphonium was founded just after the Era of the Wounded Sky in the year 315 C.E. when the Voice of Crys was held captive by the Ice Angels and used to help break the sky and amplify the power of the Soulless God Zenos. After taking refuge in the body of Professor Nann Baruwski while she was conducting experiments in harmonic audio fields, the Voice was finally lured out by Morshoth Skyplume who sang the song he composed, titled "The Collectivist Crescendo". Since then, it was revealed that the Voice of Crys was somehow entwined with the soul of a mortal named Jilai, whom only the Voice of Crys can hear, though some believe they can hear Jilai when he sings. The Voice has taken residence in the Symphonium Opera House in Hallifax.

The Symphonium is a bard archetype guild. They can choose to follow either Lowmagic or Highmagic. Their main skill is Music with specialization in the operatic music of Loralaria; their secondary guild skill is Acrobatics. Members of this guild can choose between the skills of Tarot or Illusions.