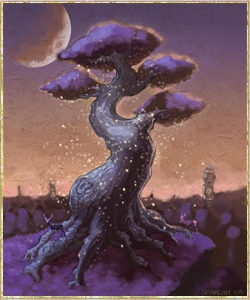 The only forest commune to survive the Taint Wars, the Serenwilde is under the guidance of two Great Spirits of Nature: White Hart, an enormous spirit stag, who lives in the Serenwilde itself, nearby to the druidical circle of Hartstone; and Mother Moon who has three avatars on the ethereal side of Serenwilde, representing the Maiden, Mother and Crone. Disgusted with civilization, who they blame for the cause of the Taint, the Serenwilde Commune withdrew into itself for a long period, and only now is slowly coming out of its shell to take part in the activities within the Basin of Life.

The nexus of power in the Serenwilde is the Moonhart Mother Tree, located in the southern part of the forest. As all forests, the Serenwilde is reflected on the ethereal plane adjacent to the Realm of Faethorn.

Listeners at the Veil

The veil between life and death has always been thin, and this has been especially the case for Serenwilde. Is it because some fae magic or primal wellspring that keeps the ancestors of the forest here? Or does the green blood of the Shelterfolk call out to those from beyond the pale, tethering them still so they can maintain their ancient oaths and charges? Who is to say. But what is clear is that the voices of the sacred dead, the ancestral spirits of Serenwilde altogether, can no longer remain silent. They have witnessed the forest's present - mired in self-doubt and broken traditions - and have foreseen the forest's future - a once, timeless forest then rotting, fading and lost. Such an ill prospect shall not come to pass, and instead, they accuse, shout and live again.

And so, the Listeners at the Veil have risen in response to the cries of the ancestors. Eschewing the traditional roles and communities that the Serenwilde once maintained, they draw upon the legacies and stories of the past in these trying times. Guided by a host of ancestors, they seek to restore nature to its truest form. They remember every lesson that the long history of Serenwilde teaches, and they will use said wisdom and the power of the ages to forge a path forward into a brighter future.

Sowers of the Last Seed

Lips, fumbling with the sweetness of honey-wine.
Fingers, dug root-deep in rich, dark-scented earth.
Ears, catching birdsong and the music of the trees.

There are some Shelterfolk who hold fast to this ancient sense of wonder: a clan of dreamers who imagine the world as Ellindel and
Glinshari once hoped it would be - rejuvenated and new. A mystical sect if there ever was one, they name themselves under the sign of a fae prophesy that describes the time when the last seed is planted and how the world would become wild and free once again. They are the Sowers of the Last Seed.

Though they recognize it is no longer possible to return to that original purity of yesteryear, the world can nonetheless attain a graceful wildness - hungry, spinning and joyous. Their aim is to reunite this broken world to its spiritual core - the Ethereal Realm itself - and they believe the Serenwilde alone holds the key to such renewal. In encouraging a closeness to that sacred realm and all its inhabitants, they foresee a future where all can hear the song of the forest.

It would be unwise, however, to deem them the gentler counterparts of their kin; indeed, the Sowers walk the wheel of the seasons and know that what must be sown must also be reaped.

Allied Tribes of the Wodewoses

"We were born from the soil of the Verdant Land. Will we not fight for it?! Will we not be its sword, its arrow, its heart!? Let no one stand in our way, brothers and sisters, in defence of our woods. Our Hunt starts tonight!"
- Rhawon Ladrennbenn's final rallying cry in the Second Battle of Oleanvir

Once a motley of fierce clans that fell during the Nature Wars, the Allied Tribes of the Wodewoses have nonetheless risen again, inheriting a 600-year old tradition that honours the ways of the wild forest. For them, the land of Serenwilde is a living, breathing entity where the cycles of life and death, predator and prey, manifest, and it shapes each Wodewose individually and communally. Indeed, the vast tribes differ in region, aesthetics and totemic folklore, but their shared spirituality finds common cause in the rallying care for the Serenwilde and participation in the 'Wild Hunt,' a celebratory ritual where these men and women engage in the primal tug of life.

Painted in shades of green, black and yellow, the Wodewoses stalk through the thick boughs of the northern woods and leave no hint of their passage; armed with nature magic and the tools of war and trade, they combine the knowledge of various disciplines to keep safe what they deem sacred.

The Hartstone is a guild of druids, who can meld with the forest itself and cause nature to rise to its defense. The guild is bonded to White Hart, a Great Spirit of Nature who takes the form of a giant snowy-white stag.

The Hartstone are a druid archetype. Thus, they are required to take LowMagic as a common skill before being able to study Nature magic. Once having mastered Nature magic, they then specialize in druidry. Their main secondary skill is Totems, which when they master will allow them to specialize in the Stag totem. At some point, a Hartstone druid decides to become a runic druid by taking the skill of Runes, or a Keeper of Hart's Secret by taking the skill of Dreamweaving, or an ecologic druid by taking Hunting and its specialization of Ecology. Druids may take Alchemy as a trade skill.

The Moondancers are wiccans who have embraced the Great Nature Spirit of Mother Moon. They are the spiritual liaisons between the Serenwilde and the ethereal realm, able to summon the fae in times of need.

Moondancers are a wiccan archetype. Thus, they are required to take LowMagic as a common skill before being able to study Nature magic. Once having mastered Nature magic, they then specialize in wicca, allowing them to summon the fae in times of need. Their main secondary skill is Totems, which when they master will allow them to specialize in the Moon totem, thereby allowing them to form covens and receive special powers. At some point wiccans choose either to take Healing to become a healer or to train in Hexes or to study Astrology. Wiccans may take Alchemy as a trade skill.

Forged from the blood of the Serenwilde's darkest days, the Serenguard are a tribe of warriors dedicated to the protection of the forest in which they reside. Long ago, a group of conspirators tried to seize control of the commune, waging a bloody civil war against their brethren. The centaur hunters gathered the greatest warriors of Serenwilde to combat the threat, establishing the Serenguard with the sole purpose of defending the commune from all threats, within its borders and beyond.

The Serenguard of today is organized in a loose tribal system that does not adhere to the strict hierarchy of the more knightly warriors. Though bound by their blood oaths to defend the Serenwilde, they are a diverse group that ranges from enlightened, spiritual warriors guided by the wisdom of the great nature spirits to fierce hunters recognized by their proudly worn war paint.

The Serenguard are a warrior archetype. Thus, they take Knighthood as their primary skill, though they can specialize as a Blademaster, Bonecrusher, Pureblade, or Axelord upon reaching mastery. Like all warriors, they take Athletics as a secondary skill. They take Totems as a secondary skill, though they can choose either to specialize in the Stag totem or Moon totem. Alternatively, instead of Totems, they may choose Hunting and specialize in Tracking. They may take Forging as a trade skill.

In the year 178, Kephera Queen of Queens Zenobia announced that in exchange for her resurrection, Grand Master Osierti would teach the Serenwilde the ancient science of monkhood. Named after a long-lost Fae word signifying the strength and majesty of Brother Hart, the first monk guild to be founded on the Basin's surface would be taught to use shofa, a special knife comprised of two conjoined crescent blades. As monks and as members of Serenwilde they value both strength alone and as part of a greater whole. Each member is encouraged to be independent and develop their own talents so that they can best support the guild.

The Shofangi are of the monk archetype. As such, after having mastered the basic monk practices of Kata, they specialise in Shofangi, the art of using double crescent knives or Shofa. Their secondary skill is Harmony, the Kephera-taught study of harmonising their body, heart and mind with the elements of Water, Wind, Wood, Fire and Metal. Shofangi may also choose to learn psionics, eventually turning their study to their bodies with psychometabolism, or acrobatics.

The Spiritsingers, the bards of the Serenwilde are a group of individuals dedicated to preserving the lore and mythos of the northern forest. The guild was founded in the year 160 CE when Ialie Starfall sang before the mysterious sphere that materialized one day at The Moonhart Mother Tree. Her song was able to awaken the voice of Trialante thus giving birth to the Spiritsingers.

Those who inquire about joining the Spiritsingers are encouraged to make sure that they understand that they are not just performers. They are not the merrymakers of the forests and there is no place in the guild for clowns. Those who call themselves Spiritsingers are those devoted to the histories and the legends of Serenwilde. They are the inspiration, the reminders of purpose, the lorekeepers.

The Spiritsingers are a bardic archetype and thus are able to choose between highmagic and lowmagic. They can also choose Hunting and Illusions as a tertiary skill and acrobatics as a secondary skill. The primary skill of choice is Music with a specialization in Wildarrane.