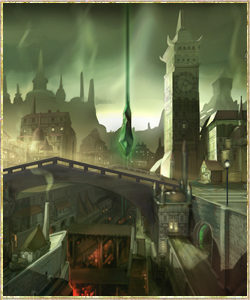 Magnagora was the only city to survive the Taint Wars, itself twisted by the Taint. The mutated and undead flocked there, claiming it as their own, interbreeding and giving birth to the viscanti race. Embracing their heritage, the city quickly became a force to reckon with, pulling their power from the Tainted plane of earth and the transformed plane of Nil, now home to the Demon Lords. Bent on conquest and domination, they quickly adapted to the prejudices of the peoples of the Basin, learning that brute force was not always the answer and instead finding more subtle manipulations were just as effective. They are now a major player in the game of power, poised to fundamentally change the landscape of the Basin of Life.

Nexus: The Megalith of Doom

The nexus of power in Magnagora is the Megalith of Doom, located amid daunting towers of the Necropolis. It simultaneously exists on the Tainted elemental plane of earth and the cosmic plane of Nil.

Nil-born and tempered in the fires of its deepest pits, they have but one mandate from the Supreme Master: "Damnation and Dominion over All". The Midnight Legion, the souls damned to Nil for eternal torment, must swell in number and the Infernals have been tasked with reaping the souls of the Basin to empower the Dominator himself. Luciphage is eternally patient and so are his Infernals - they embrace the revered undeath that they may fall and rise, no task too perilous, no obstacle too grand for the undying. Cunning and manipulation are their weapons, but so is brute strength when the situation calls upon it. Power is its own reward but by empowering themselves, they also empower the Supreme Master.

Known primarily for their philantropic work and patronship of the arts, the Iniquitous Society advocates for scientific and cultural progress of Magnagora. Composed of the most devious and competitive, it is no place for the weak of heart or those prone to black and white morality. The Society scoffs at no man's ambitions and desires as every pursuit is to the betterment of the Engine - every challenge a test of character, every experiment a valuable lesson. There is no tool too far-fetched or method too daring for their members as here the ends really do justify the means.

In the Verses of Magnora was its transformation foretold, but first Magnagora worshiped the Five Truths of Shallamar and paid obeisance to the Fates. It was only once Their treachery was revealed and the transformation complete, that the city was able to see the entire picture clearly: they had been mere instruments of the Fates, destined to be woven into the Tapestry with no regard for their own will. No more. The Heralds have risen from the ranks of Magnagorans to cast the shackles of the wicked Sisters of Fate aside and forge their own path - devise their own Dark Fates. Guided by the spiritual teachings of the Demon Lords, tempered by the wisdom of the ancient Earth Lords, and empowered by the Dark Scream, the Heralds seek to transform into ideal Magnagorans - enlightened, empowered, unchained.

As anticipation and curiosity arose in the city of Magnagora, the black orb that hung over the Megalith of Doom was suddenly awakened by Aia y'Kada and her words hailing the strength of the Engine of Transformation. Awakening the Dead Voice of Jagrerox, the Cacophony was founded in the year of 159 C.E.

From those who wield instruments to bring about the death of their enemies to those who play for raptured audiences to strengthen their allies, the Cacophony builds upon the strength and culture of Magnagora. With violas, lyres, mandolins, or other stringed musical instruments at their disposal, they have the power to send demonic beings from Nil into an attacking frenzy or cause a plague of ill fate towards their enemies. Bringing about the destruction of all who stand in their way, they walk a fine line of music and death, lore and taint.

The Cacophony is a bard archetype guild. They can choose to follow either lowmagic or highmagic. Their main skill is Music with specialization in the tainted music of Necroscream; their secondary guild skill being in Acrobatics. Members of this guild can choose between the skills of Tarots or Illusions.

The Geomancers Guild are mages who devote themselves to the element of earth, a Tainted plane that has been become associated with disease and destruction. Even their allies consider Geomancers to be somewhat insane, as the twisted element they work with often twists their minds as well. Their magics are honed to be aggressive and deadly.

Geomancers are a mage archetype. Thus, they are required to take HighMagic as a common skill before being able to study the Elemental magic. Once having mastered Elemental magic, the Geomancer then specializes in Geomancy, allowing them to travel to the elemental plane of earth. The main secondary skill of a mage is Illusions. Geomancers also at some point decide to be a runic mage by taking the skill of Runes, or a dream mage by taking the skill of Dreamweaving, or a psionic mage by taking Psionics (with the choice of specialization between Telepathy and Telekinesis).

Nihilists are the priesthood of Magnagora, and are tied to the demonic plane of Nil, where they are also receive the powers of necromancy. While nominally the spiritual leaders of Magnagora, they often focus on the accumulation of material wealth and power for the city rather than more esoteric concerns. Most adepts are accompanied by a demonic thrall sent by a Demon Lord of Nil to help in their work.

Nihilists are a guardian archetype. Thus, they are required to take HighMagic as a common skill before being able to study Cosmic magic. Once having mastered Cosmic magic, the Nihilist then specializes in Nihilism, allowing them to travel to the cosmic plane of Nil and make pacts with the Demon Lords there. Their main secondary skill is Rituals, which when they master will allow them to specialize in Necromancy, thereby enhancing their holy powers. At some point Nihilists choose either to take the Hexes skill or to train in Tarot or to study Astrology. Nihilists may take Enchantment as a trade skill.

The Ninjakari are the monks of Magnagora, trained in the deadly arts of the jakari, a chain weapon. Their monk school was founded after the discovery of the illithoid, who imparted their arts to the Magnagorans, sensing close allies in their mutual goals. The Ninjakari are stealthy warriors, preferring to strike from the shadows when least expected than engage the enemy directly, disdaining those who lack subtlety in their methods.

The Ninjakari are of the monk archetype, studying Kata and then specializing in Ninjakari as their primary skill. They also study Stealth, the practice of clandestine espionage and subterfuge, and can choose to study either Acrobatics or Psionics - the latter specializing into Psychometabolism.

In the orclachi tongue, ur'Guard translates to Warriors of the Dead. During the peak of the Holy Celestine Empire, they were the shock troops of the Empire sent out to keep the peace among the protectorates (unlike the Paladins who were the elite guard kept close to the imperial capital). After the Taint Wars, they chose to settle in Magnagora, embracing their heritage as the chosen undead warriors of the Vernal God Urlach. Of course, most of the ur'Guard are not undead as it takes a rigorous mastery of necromancy to achieve this state, which they are then referred to as "Death Marshals".

The ur'Guard are a warrior archetype. Thus, they take Knighthood as their primary skill, though they can specialize as a Blademaster or Bonecrusher upon reaching mastery. Like all warriors, they take Athletics as a secondary skill. They also may take Rituals as a secondary skill, and can specialize in Necromancy along with Nihilists. Alternatively instead of Rituals, they may choose Hunting and specialize in Tracking.