Skip to content
Check out our other great game worlds.
← Back to Histories 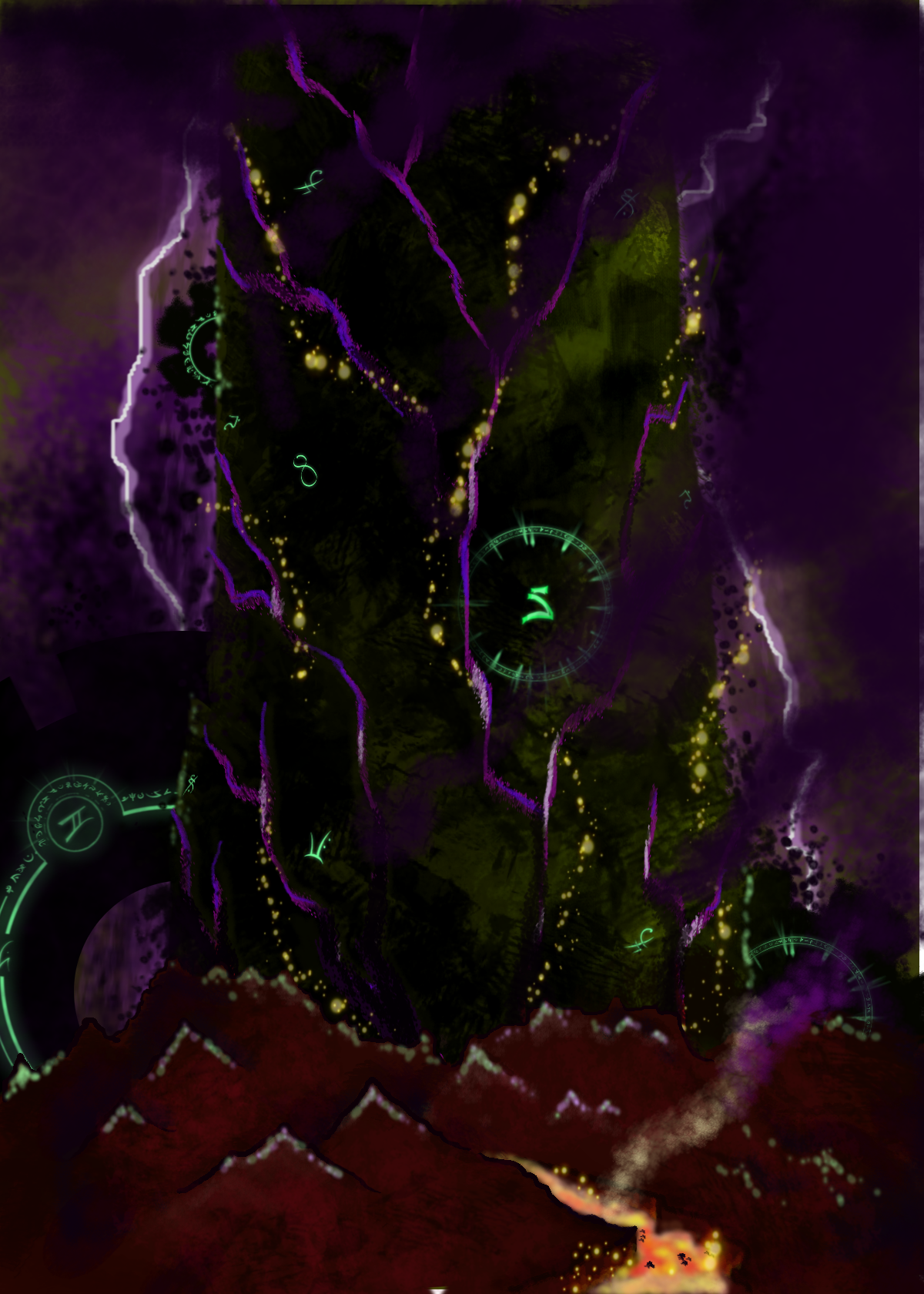 The summons hit me right in the third eye, filling my inner vision with a pulsating white light and my head with an irritating tonal vibration. Of course, I immediately recognised the touch of Xyl. But what could prissy Xyl want? Someone to hold his hand while he made crystal gewgaws to hang about his ruddy crystal spires? I didn’t really care so I banished the summons from my mind.

Realising I must have been standing motionless in the swamp for some time, I blinked and then laughed. Looking down, there was one of Blooredi’s crocodiles trying to gnaw off my foot. It rather tickled.

“Oh, just warm hearted Xyl wanting me to come look at the stars or something,” I said, pulling the crocodile off my foot. “You know, Bloo, your creations rather remind me of Xyl.”

“Why? Because they're cold blooded?”

“No. It’s because they have just about the same range of expression!”

We both laughed, and I tossed the crocodile to Blooredi. He stroked its ugly green hide and rocked it back and forth in his arms. Not that it was a baby or anything, it was in fact an enormous bull. But, you know the Seventh Circle. They’re all a bit weird when it comes to their creations.

“So what do you think, Lady Mugs?” he asked, looking imploringly at me. “Do you think the crocodiles have a chance?”

Of course, I lied. There wasn’t a chance in any of the four corners of the Void that Blooredi’s crocodiles would ever coalesce a collective consciousness. I should know, as I had been studying formation of collective consciousnesses since the first one manifested and I had developed a sense for which ones would form Great Spirits and which ones wouldn’t. Yes, it had a little to do with how many there were - the population had to reach a critical mass - but there was something more underlying which ones rose. Not intelligence, though that helped, but an essential quality to their inner essence. And crocodiles didn’t have it. I’d guess they’d stagnate in that spiritual state until the end of time.

“Great Yudhe!” cursed Blooredi, unmaking the crocodile, and tearing it apart into etheric strips. “Am I the only one of the Seventh Circle who hasn’t had a Great Spirit? Pah! Even that simpleton Viravain has Raven. And if an idiot like Tae could raise a Great Spirit, why can’t I?”

“Didn’t Xyl name a sector in the heavens after your crocodiles?”

“Oh, la-la-loo, how lucky for me,” he said, spitting and rolling his eyes contemptuously.

I politely tried to look interested as Blooredi began creating a new creature out of the aetheric soup which was all that was left of the bull alligator. He had a point. It was hard to imagine someone like Viravain creating a Great Spirit, especially as she usually created such small insignificant creatures. But as soon as I saw the ravens, I knew they’d quickly form a collective consciousness. There was something woven very deep within them, very mysterious. I’d been keeping an eye on Viravain ever since, and I was no longer taken by her poor-little-me routine. There was more going on behind those baby blue eyes than the others suspected. Except perhaps her brother, Shikari, but who'd he ever share anything with.

“Well what do you think of this one?” asked Blooredi, holding up his newest creation.

“I’ll call it an alligator!”

A second summons hit me in the third eye, and this one was so bright and loud that it was almost painful. I’d never known Xyl to be so insistent and, well, rude. Who did he think he was? More curious, who would have thought he’d show so much backbone? But he wasn’t going to use my head as a drum, so I hurled my own thought bubble back at him, strong enough that I imagined it’d drop him onto his bony glass arse. Moments later he hit me with a third summons that was stronger than the other two. And this one was painful!

“That blasted fool!” I screamed.

Or at least, I would have screamed if my mouth didn’t suddenly fill up with swamp water. That last summons must have knocked me on my arse! Enormous hands belonging to Blooredi pulled me up out of the swamp and set me on a rock.

“Yes, Xyl again. Well, I’m going to see what he wants. If this isn’t something good, I swear I’ll shove his crystal spires…somewhere he wont like!”

Blooredi laughed and waved good bye, as I wrapped myself in a bubble and flew off to the House of Xyl. Atop the highest - and coincidentally the most power-laden - mountain upon the First World was a conglomerate of tall spires that he had been building with one of the Fourth Circle (I forget her name - somebody insignificant) for aeons.

As I approached the crystal spires, I had to grudgingly admit to myself that I was a little jealous. They were gorgeous constructions, that was a given. But more awesome was that they were situated atop the First World’s fulcrux of energy, and the crystal formations magnified these energies, making the House of Xyl one of the most powerful instruments ever known.

Sensing activity in the observation chamber, I composed myself and leisurely walked towards it. I deliberately stopped several times to admire the view. Damn if I’d give Xyl the impression that I’d come running at his beck and call.

But it was I who was taken back when I finally walked in. It looked like the entire Fifth Circle had gathered. Apparently, I was the last to arrive. Xyl just stared at me with his jeweled eyes glittering. Was he annoyed? Who knows, I could never tell with him.

“A party!” I said, sweeping into the chamber (and splattering a lot of mud around which I just knew would definitely annoy fussy Xyl). “Xyl, darling, you finally are putting your house to good use!”

Several laughed with me as I strolled around. Raezon and Roark were bent over a game of divine chess, directing the living pieces across the board. Several others were browsing through Xyl’s collection of knowledge crystals, where he stored collections of his stories and philosophies. Elcyrion smiled at me and winked when he noticed Xyl briskly cleaning the mud left in my wake.

“Just lovely,” I said and smiled back.

While Xyl cleaned up, I walked over to the game of divine chess being played by Roark and Raezon. They were both studying the board with grim determination. It being the latest game in vogue among the Fifth Circle, I must admit I was quite good at it. Roark’s remaining bishop was wounded and the line of pawns were broken.

“Try moving out your healthy knight,” I suggested, immediately seeing a way to victory if the knight could defeat Raezon’s rook.

“Really, Muggs!” said Raezon. “If you want to play, wait your turn!”

Roark scowled at me and moved his wounded bishop anyway, who barely won against a pawn. I could see that Roark still had a chance for victory, but it was obviously not the best move. Such was the norm with Roark, always wanting to do things his own way.

“Attend, please!” Xyl commanded, floating upwards on a spinning platform. “As you know, I have constructed this observatory to study the movements of the cosmos. Two weeks ago, I noticed this.”

With a gesture, he caused the dome above to darken, then swirl in a mass of colour, then crystallise into a scene from the depths of space. Xyl’s glowing crystal hand twitched back and forth as he shuffled between different dimensions.

“Here,” he finally said, pointing to a patch of darkness.

With an effort, he magnified the sector he had found. Many of us gasped, including me. There was a swirling darkness, and a sense of a wrongness that lashed out even from this reflection. I shuddered and hugged myself.

“I do not know,” said Xyl. “I was hoping some of you might have some insight."

“It appears to blot out the stars themselves.”

“It is either blotting them out, or consuming them."

“Can you magnify it more?” asked Roark.

“I find it repulsive too,” I said.

Several laughed nervously with me, but the magnitude of what we were witnessing was too terrifying to be taken lightly. Xyl glared at me and looked away. I couldn’t blame him.

“Let us link and lend Xyl our power,” suggested Raezon.

Thus, we linked our minds together and focused on Xyl. He flared with power and exerted his will upon his crystal observatory. The image wavered and sharpened, then suddenly magnified. Staring up at the crystal dome, it was like jumping into a pit of nothingness. As Xyl struggled to maintain his link, we tried to discern, with whatever senses we could bring to bear, what exactly we were looking at.

“There!” said Elcyrion, pointing up. “Upper right. There was a…flash…or some sort of movement anyway.

Several crystal columns along the edge of the chamber cracked as Xyl struggled to focus and magnify that sector. For a moment I saw a gigantic eye open, rimmed with blackness and as empty as the Void.

“Could these be half-formed?” asked Elcyrion.

“Hardly,” said Roark. “I believe these are the Handmaidens of Magnora.”

As though the vile images heard their name, a terrible presence seemed to leap out from the image on the crystal dome. We all cried out, breaking our link, and throwing protective shields around ourselves. The dome above cracked and shattered, raining down on us like glittering hail. Xyl’s entire right arm had likewise shattered and he was sprawled upon the floor.

It was many minutes before anyone spoke. We silently gathered together and helped Xyl reform his arm. It somehow seemed appropriate that such knowledge was received among such destruction.

“We must bring this to the First Circle,” said Xyl wearily.

As we gathered to transverse to the Divine Havens where the First Circle gathered, I glanced at the divine chess board that was left forgotten. Without Raezon or Roark controlling the game, the pieces had attacked each other in a frenzied melee.

Nothing was left of them except a smear of blood and gore.