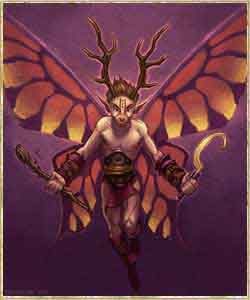 Faelings are not descended from an Elder God. Rather, they are the cross between an elfen and a creature of the fae. Faelings are almost always raised in elfen communes, and are given special status by wiccans. Physically, they look like extremely diminutive elfen, even smaller than the furrikin, and they all have elaborate butterfly-like wings enabling them to fly. While not very strong, they make up for that in speed and intellect.

Ever since the undead elfen Rowena Nightshade tricked Laeroc, Consort of the Queen of the Fae into fathering her child, faelings who take the path of the tainted Great Nature Spirits of Night or Crow transform into shadow faelings, a curious breed of faeling, larger than others of their kind, with a dark complexion that seems to churn with shadows, more bat-like wings, and eyes that glow with a somber red fire.

Note: Not all faelings have antlers. The antlers on the faeling in the picture is the result of the Stag Totem specialization.