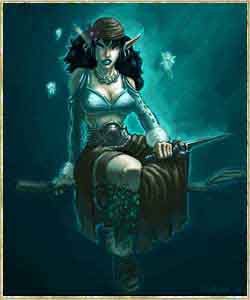 Descended from the Elder Goddess Elfenehoala, the elfen race have always had a close affinity to the forests. They consider themselves the saviors of Lusternia as they were who first discovered the ailing Fae, spirits of nature, and healed them and likewise the forests. They are a lithe, beautiful people, with delicate pointed ears and almond-shaped eyes. Their skin tone ranges from alabaster white to some varying hues of green. Though most Elfen still prefer forest communes, there are those who have been drawn to city life.