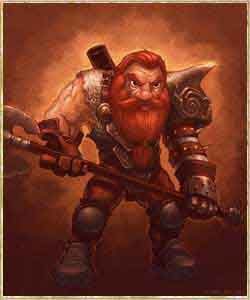 Descended from the Elder God Clangorum, the dwarven race originally called themselves the clangoru, but humans, when they first arrived in Lusternia, for some reason insisted on referring to the clangoru as dwarves, a term which eventually became accepted in the common vernacular. Although they look like humans, they are substantively shorter and stockier, and their hair grows at a rate five times faster than that of humans. Thus, most male dwarves prefer to grow beards rather than shaving five times a day. Contrary to rumour, it is rare for a female dwarf to grow a full beard; however, growing long, silky sideburns which can be braided is a fairly common practice. They are a robust mountain race with a rich history, though the dwarven kingdom itself was split during the Taint Wars.