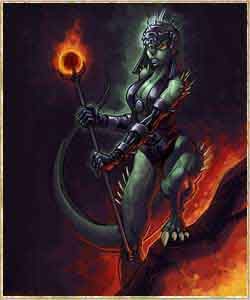 Descended from the Elder God Dracnoris (also known as the Dragon God), the dracnari are a race of lizard-like humanoids with the ability to breathe fire. They have an affinity to volcanic regions, especially the fire hills of the southwest, where they were the primary founders of the city of Gaudiguch (which became lost in time during the Taint Wars). Their skin is scaled green and features range from the truly draconic to remarkably human-like. Like the merians, dracnari do not recognize half-breeds: either you are a dracnari or are not, denoted by the ability to breathe fire.